Ryu lets another shot at 4th tour win slip by

Ryu lets another shot at 4th tour win slip by 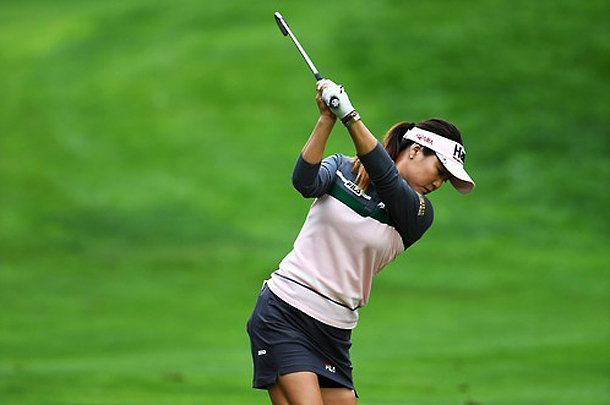 Ryu So-yeon let go of another chance to win her fourth LPGA tour event at the Bank of Founders Cup in Phoenix, Arizona, on Sunday. The event was played at the Wildfire Golf Club JW Marriott Phoenix Desert Ridge Resort & Spa.

Although she is ranked fifth in the world according to the Rolex rankings, she has not won a tournament for 31 months. She kept herself in the competition until the 11th hole, where she recorded seven birdies and two bogeys, tying for the lead at 23 under par with Anna Nordqvist of Sweden.

However, she missed a short putt for a birdie on the 13th hole. After losing her chance for a sole lead, Ryu could not get herself back into the game. While she made a bogey on the 14th hole, Nordqvist of Sweden made a birdie and widened the gap by three strokes with four holes remaining in the tournament.

Ryu made bogeys on the 16th and 17th holes, dropping to tie for fifth with a total score of 267, 21 under par. Ryu’s recorded five bogeys on her last day, compared to one bogey during the 54 holes of her first three days.

Ryu has been a consistent player on the tour, finishing within the top ten in all four events this season.

Since she joined the LPGA tour in 2012, Ryu has only won three LPGA tour events, and after winning her last LPGA tour event, the Canadian Pacific Women’s Open in August 2014, Ryu has not won an event. She is the only player in the top 10 Rolex World Ranking that did not win a tournament for more than two years on the LPGA tour.

Nordqvist won her seventh LPGA tour event with the Founders Cup as she shot four under par in the final round to finish the tournament at 263, 25 under par. Nordqvist left a strong impression, shooting 61, 11 under par, on the third day and an under-par round on the last day.

But Nordqvist was unable to break the tournament record previously set by defending champion Kim Sei-young at 27 under par. With a win, Nordqvist prevented Korea from taking its fourth consecutive LPGA tour win.

Chun In-gee played the best among the Korean golfers, finishing second at 23 under par. Chun shot a bogey-free round of 66, six under par, to move up in the leaderboard. Jang Ha-na, 2017 ISPS Handa Women’s Australian Open champion, also climbed up the leaderboard by shooting 63, nine under par, to finish tied at fifth.

After winning the HSBC Women’s Champions earlier in March, Park In-bee also finished fifth along with other Korean golfers by shooting 67, five under par, on the last day. With her fifth-place finish, Park moves up two spots on the Rolex World Ranking and is now seventh in the world.

The Kia Classic, sixth tournament of the 2017 LPGA Tour, will start on Thursday in Carlsbad, California.