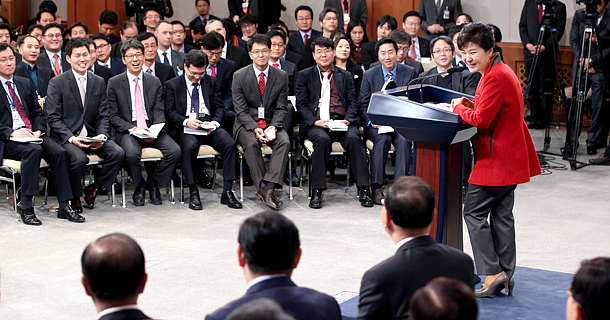 When asked by Blue House correspondents at a New Year’s press conference in 2015 if she did not feel a need to have one-on-one meetings with her ministers more often, former president Park Geun-hye looked around at her ministers and said, “Do you think so too?” [PARK JONG-KEUN]

Novelists and TV drama scriptwriters were at a loss for words and the satirical political film “Inside Men” looked childish last winter compared to the preposterous real-life power abuse scandal of Choi Soon-sil and the rest of the inner clan of President Park Geun-hye. The state governance system has became dysfunctional ever since. But it was not much of a difference as the government system had run normally over the last four years. The president hardly met with her cabinet members, and Sejong administrative city had been without top policymakers most of the time.

Her father Park Chung Hee commanded economic affairs as if fighting a war. He checked everything from fertilizer factories to nuclear reactors and often paid visits to manufacturing sites for exports in the 1960s. He called in the working-level officials ahead of introducing value-added sales tax in 1977.

Another military general-turned president Chun Doo Hwan relayed economic authority to his deputy prime minister, saying he knew little about the economy. The ministers chose their own people. The bureaucratic organization was disciplined and full of will. Achievements spoke for themselves. Those with proven capacity were promoted. There was no need for kowtowing and room for favoritism.

Park did neither. She did not meet with the deputy prime minister often nor gave him any power. Her puzzling behavior was explained after the Choi Soon-sil scandal broke. Park was used to keeping to herself and her inner circle. Things did not change even in an emergency situation. Aides could not meet her to report on urgent affairs. The economy command stayed impotent throughout the last four years.

She was a disaster in appointments as well. She placed people without any relevance as ministers, vice ministers, and presidential secretaries. Hopes for surprises were dashed when many of them proved to be useless. In some government organizations, no replacements were made over the last four years. Frequent changes are a problem, but keeping the same person in a certain position without clear reason also is not fair.

Because her choice of people was random, people around her often were ineligible and colorless. She was surrounded by scholars with ambitions for high-profile public jobs. When they earned favor from the president, they ended up in top seats at the government and state organizations, worsening inefficiency in governance. Yet she still kept her ears shut. She snubbed a reporter who pointed out her problem of lacking communication. Her first and last deputy prime ministers for economy Hyun Oh-seok and Yoo Il-ho both could not answer when they were asked on how often they met with the president.

The U.S. and Japanese presidents hold tea time or roundtable discussions with their cabinet leaders. The presidential candidates should draw lesson from Park’s failures. Upon winning, the nominee should immediately name the deputy prime minster for the economy in his shadow cabinet and normalize the economic command system. Sejong city must no longer be left abandoned. Because the ministers and vice ministers are mostly away in Seoul, the bureaucratic organization runs without direction and discipline. The first thing the next president should do is normalize order in and communication with the bureaucratic community.