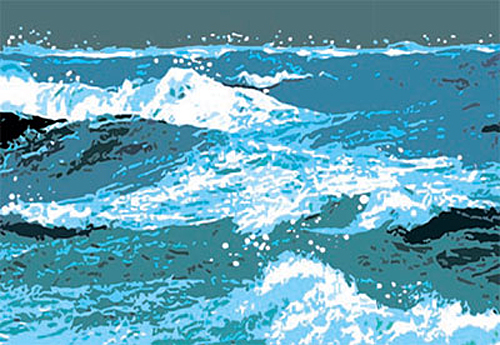 The impeachment trial and removal of President Park Geun-hye was completed relatively smoothly despite concerns of resistance and social unrest in the aftermath. We should congratulate ourselves for passing the tough test of solving an unprecedented political challenge in a peaceful and orderly manner as defined by our Constitution.

The Constitution is the foundation of our nation and the community we built for ourselves. We still have vivid memories of the emotional scene in 1987 when a peaceful democratization movement led to the rewriting of the Constitution and dramatic passage of the revision by the National Assembly. It is the duty of every citizen of this nation to safeguard the Constitution we vowed to keep and obey. We should be proud of ourselves for exercising restraint thanks to our commitment to the Constitution even with public opinions and sentiment sharply divided and emotions running high.

But waves can rise high even after a heavy storm passes. Ominous clouds loom over the Korean Peninsula. Our leaders agree that we must unite forces and wisdom in order to combat the challenges through diplomatic procedures. But the rage and resentment kindled throughout the impeachment stage does not easily subside. Our tragic historical trajectory reminds us of the fact that inner division had always been our biggest weakness when we are faced with a national crisis. We should fend off reckless heroism by keeping to the basic requirements to sustain a democratic community.

A democratic society is a system where diverse groups and individuals co-exist peacefully. National decisions, in theory, are made on the principle of majority rule and the guarantee of minority rights. But the voices of the majority can sound bigger and silence those of the minority when a huge crowd is gathered in the streets for a certain purpose. Upon retiring after delivering the historic Constitutional Court verdict upholding the legislative impeachment, Lee Jung-mi, the acting chief justice underscored that “the essence of the democracy we all love lies in the respect for the thoughts and opinions of others that differ from our own.” Her advice is the keystone to balance a democratic community of diverse groups and opinions.

Choi Jang-jip, a political commentator and professor famous for his work on a balanced Korean democracy over the last three decades, warned of the dangers from populace-led democracy. He advised the crowd of candlelit vigils not to hype the impeachment as their triumph over the conservatives, as such belief could cripple democracy in the country, not advance it.

The next presidential election happening straight after an impeachment trial will take place in a schism, not unity. We are at a massive transitional stage in all areas — politics, economy, society, culture and technology, to name a few. Conservatives and liberals exist in all societies, and both sides must change in accordance with the calls of the times in order to sustain a healthy democratic society.

As elections tend to divide a society rather than bring it closer, the extent of the divide may hinge on the campaign agenda. National security is the top agenda in the election to select the 19th president in May. Yet the people are still divided over the plan of deploying U.S. antimissile Terminal High Altitude Area Defense (Thaad) system. The divergent groups that had clashed over the impeachment on the president could wrangle over national security issues because their differing views and sentiments towards the traditional Korea-U.S. ties are fundamentally behind the dispute.

U.S. President Donald Trump and Chinese leader Xi Jinping will meet in April, but whether they could come to an agreement on the question of strategic balance in Korea and Northeast Asia amid mounting North Korean nuclear threats remains questionable. Politicians must be fully ready to address a potential national divide from the Thaad and other security issues during the campaign.

Contestants running in the uncommonly short campaign may be tempted to move voters through sensational and provocative words after months of heated impeachment protests. They must restrain from making controversial comments on national security, as what they say can put the public’s lives and national fate at stake. What is most important today is ensuring the stability of this nation and its democracy.