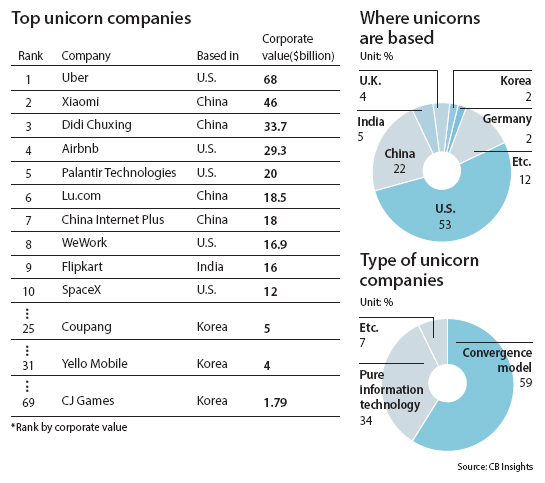 Three Korean companies are among research firm CB Insights’ list of 186 top start-ups by corporate value. To improve Korea’s presence in the global venture scene, the Korea International Trade Association suggested that Korean start-ups should boost efforts to adopt new business models and reach out to develop its global network.

Called unicorns, these 186 start-ups aren’t on the stock exchanges but have corporate values estimated at more than $1 billion. The three Korean unicorns on the list were Coupang, which ranked 25; Yello Mobile, ranked 31 and CJ Games, now Netmarble Games, at 69.

Companies from the United States and China dominated the list, taking 53 percent and 22 percent of the pie. India followed by 5 percent with England tailing at 4 percent.

KITA found the 186 companies largely could be divided into two camps: converged models that combined technology with pre-existing industries and pure information technology companies that provide hardware or services on big data or security.

Convergence, which mixed IT with shopping, finance and sharing, proved to be a prevailing trend, as firms in that sector took up 59 percent of companies on the list. Pure IT companies, on the other hand, comprised 34 percent. Seven of the top 10 were converging companies, including Uber and Airbnb.

“New business realms like robots, augmented and virtual reality are finding ways to actively converge with existing industries,” said the report, concluding that convergence will continue to enlarge its share of the start-up scene.

There was also a meaningful relationship in the preference of business models and the company’s origin. American start-ups had the tendency to create new markets based on a business model that hadn’t previously existed, such as in the case of Uber and Airbnb.

On the contrary, China was skilled at adapting and localizing successful pioneers, then profiting from an enormous domestic market. Tujia, for example, is a model similar to Airbnb but have developed the service to Chinese culture and regulations.

Europe, where investors are a little more conservative, had fintech start-ups that expanded business through pulling in clients through partnerships with major commercial banks.

Based on the analysis, KITA devised guidelines for Korean start-ups who wish to reach unicorn status.

The first key was to establish a profitable business model in a growing industry. New business realms in IT are platform businesses, therefore early entry is the key to gaining clients. KITA suggested transforming existing models, converging with old industries or the lean start-up method, in which the company continuously opens beta versions to the public before official release to gauge market response.

Another key factor for start-up entrepreneurs was expanding global networks in the early stages, increasing the possibility for foreign investments., KITA suggested that Vietnam and Indonesia have high smartphone distribution rates that domestic countries should consider targeting for a long-term perspective. Searching for opportunities with global venture capitalists and accelerators was another core task, as most investments of more than 100 billion won ($89.3 million) rarely come from domestic investors.

“The government’s role in the task of creating Korean unicorns is not to focus on pushing certain start-ups, but creating a favorable business environment,” said KITA researcher Kim Bo-kyung.