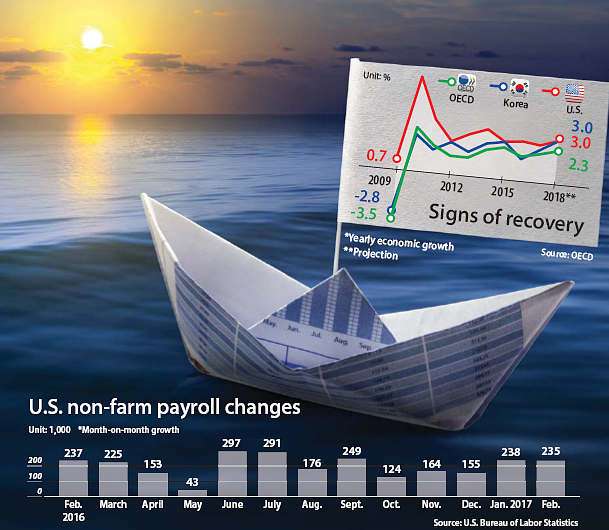 The global economy finally appears to be recovering.

Economic indicators from major developed countries that experienced a slump after the 2008 global financial downturn seem to improve one after the other. And many analysts also believe that the theory of the 10-year cycle, which argues that the global economy will be hit negatively every 10 years, might not happen this time.

“The signs of recovery are encouraging,” said an article in the recent edition of the Economist magazine. “It looks likely that this year, for the first time since 2010, rich-world and developing economies will put on synchronized growth spurts.”

In fact, there are many economic indicators that back that view.

First, the condition of the labor market in the United States is strong. The number of workers, excluding farmers, rose 235,000 in February, far above market expectations.

The Leading Economic Index (LEI) for the United States rose 0.6 percent month-on-month to 126.2 in February, the highest level since 2006.

“After six consecutive monthly gains, the U.S. LEI is at its highest level in over a decade,” said Ataman Ozyildirim, Director of Business Cycles and Growth Research at The Conference Board. “Widespread gains across a majority of the leading indicators points to an improving economic outlook for 2017.”

The European Commission’s economic sentiment index also is at the highest level since 2011 and Japan, which experienced long-term slow growth, revised this year’s forecast for growth, from 1 percent to 1.4 percent.

Mario Draghi, president of the European Central Bank, said the risk of deflation had largely disappeared and that he is not considering lowering the key interest rate in the near future.

In Korea and Taiwan, exports are expected to grow as demand for semiconductors increases and manufacturers plan to release new smartphone models. Emerging countries that struggled due to a hike in the consumer prices have been able to remove burdens as the inflation rate slows. Global oil prices have dropped about 10 percent even after the Organization of the Petroleum Exporting Countries agreed to lower production, but this won’t have a large effect on the current global economy.

The Organization of Economic Cooperation and Development also viewed the current economic situation positively. The OECD said the economies of its 34 member states will grow 2 percent this year and 2.3 percent next year. The rate for last year was 1.7 percent.

Many also believe that the U.S. Federal Reserve’s announcement that it will raise the rate twice this year is a positive effect on the economy.

However, the global economy hasn’t fully recovered. For the economy to continue to grow at the current pace, countries need to remove uncertainties that might hold them back from growth.

Possible interest rate increases in the United States and other major countries’ central banks might lower the flow of funds globally. The possible changes in trade policies by the new administration in the United States might strengthen the dollar significantly as well.