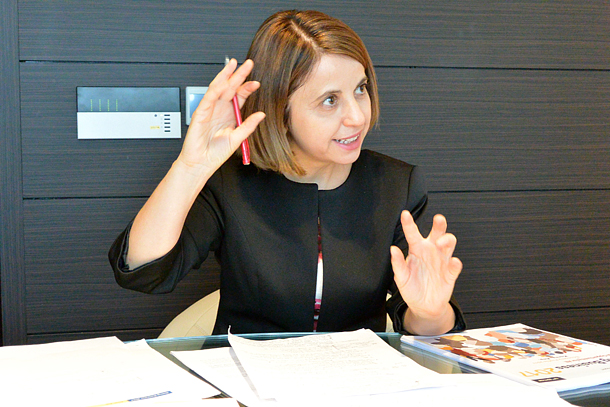 Hulya Ulku, senior economist in development economics at the World Bank, during a recent interview at the Plaza Hotel in Seoul. [WORLD BANK]

The environment for starting a business in Korea, including basic infrastructure like electricity, costs and the time it takes to register a business has improved, thanks to efforts by the Korean government, according to a World Bank study.

But Hulya Ulku, senior economist in Development Economics Vice Presidency at the World Bank, says as much as deregulation is important in boosting entrepreneurship in countries, it is not about how aggressively regulations are lifted but rather the implementation of “smart” regulations that would not only improve efficiency but also effectiveness.

“People misunderstand [regulations],” said Ulku. “Regulations in an ideal world are there to enable the business environment.”

She said regulation plays a crucial role, as it not only helps the government level the playing field for smaller and midsize businesses but also monitors and protects the rights of investors.

Government instead should be focused on implementing and improving regulation to raise efficiency and effectiveness, such as reducing the time it takes to register businesses that will also help lower costs.

And all of this is possible with the rapid expansion of innovation.

“Today it can be done as the digital world is becoming prominent with electronic registration and electronic transactions,” Ulku said.

The World Bank economist said the implementation of such technology doesn’t mean that the government regulation isn’t there. But rather it helps individuals to easily start their businesses at a lower cost.

“If you make the registration online without leaving the comfort of your home, it is still regulation,” said Ulku. The difference is “it is not going to cost much for the entrepreneur.”

She said this was important as if the processes take longer, entrepreneurs will be discouraged.

Ulku said studies show that countries with a multitude of regulations that are both costly and extensive also have lower entrepreneurship rates.

Regulations have a larger impact on smaller and midsize business as they lack large work forces that specialize in handling regulatory filings.

“The time spent in complying with the regulations take away time of productive uses of that labor,” Ulku said.

She said the World Bank study today shows that thanks to innovation and technology many countries are adopting more efficient and effective regulations that help small businesses launch.

“You see the trend in all [economies],” Ulku said. “The world economy is improving in the regulatory environment.”

In this year’s World Bank’s Doing Business report, Korea’s rank slid one notch from a year ago to fifth among 190 countries studied.

However, Ulku says the changes in the ranking isn’t alarming as only minor factors contribute to the difference in the country’s standing.

According to the study, Korea climbed six notches when it came to starting a business to 11th this year largely thanks to the simplification of the process in registering businesses. Most notably, the government has eliminated post-registration procedures. However, while it takes four days and two procedures to start a business in Korea, it only takes a half-day and a single procedure in New Zealand, which ranked the world’s No. 1 country in conducting business. While it costs 14.6 percent of income per capita to start a business in Seoul, there was no cost in Slovenia.

However, Korea ranked first when it came to electricity supplies and enforcing contracts, while it ranked low when it came to construction permits, registering property and cross-border transaction and tax payments.