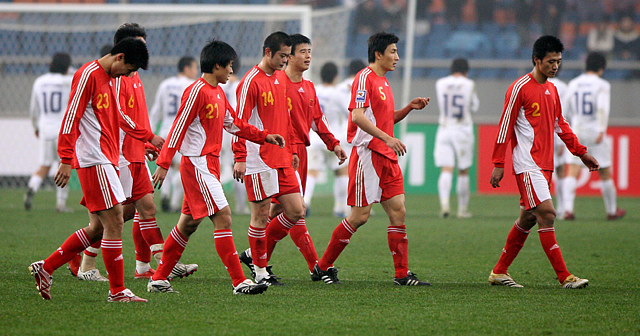 “Infant baboons and other young primates appear to be born with only three inborn fears – of falling, snakes and the dark.” Fear of snakes corresponds to the danger posed by “our ancient enemies the reptiles … which must have been particularly terrifying for the visually oriented primates.”

American astronomer Carl Sagan’s 1978 Pulitzer Prize-winning book, “The Dragons of Eden,” discussed the fears that primates have. He advocated the theory that humans fear snakes because our ancestors had long been preyed on by reptiles.

A similar sentiment can be found in sports. Being defeated by the same opponent repeatedly over a long period of time instills fear. The Chinese male soccer team fears playing against Korea. At the top level, China won once, drew 12 times and lost 18 matches. In the latest game last September, the last qualifier round for the 2018 Russia World Cup, China lost 2-3 to Korea. On March 23, the Chinese team will have a home game in Changsha. But China refused the charter flight operation that the Korean Football Association requested. While some consider this retaliation for the Thaad deployment, it could also be a tactic to tire out Korean players. But if China wants to get a cure for its fear of Korea, this is not the right prescription.

In fact, Korea has had similar experiences. In the past, Korea was overwhelmed by playing against European teams. Korea lost 0-5 to the Netherlands in the 1998 France World Cup. The national team was crushed by France in the Confederation Cup and by the Czech Republic in a match in 2001. The Korean team collapsed without playing to their potential. Then Korea coped with the deep-rooted fear before the 2002 Korea-Japan World Cup, thanks to an accurate and effective prescription. In the past, we had an ungrounded belief that Korean football was based on stamina. But head coach Guus Hiddink used science to confirm that this was an illusion. The Korean team implemented a systematic training program to build up stamina and escaped its fear of European soccer.

On International Women’s Day, March 8, a statue named “Fearless Girl” was installed in the Financial District in New York. The investment management company State Street Global Advisors installed the statue to encourage young women to become female executives in the corporate world. The girl facing the Charging Bull statue garnered attention around the world. New York City authorities extended the display from one week to a month.

The sculpture successfully reminded people of the gender discrimination at the workplace. Now, a good diagnosis and prescription should follow. As the father of a girl, I hope to see my own fearless girl climb on that charging bull and break the glass ceiling.