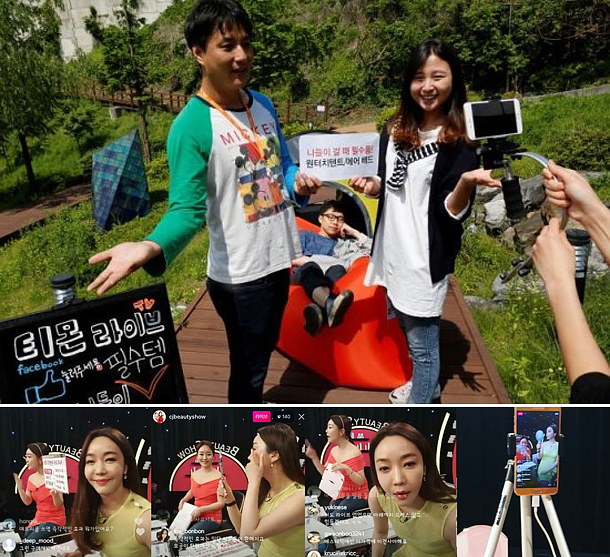 Live-streaming video has risen as a necessary marketing tool for e-commerce operators in Korea. Ticket Monster, a social commerce operator, top, and CJ O Shopping, a home shopping operator, are just a few who have jumped on the bandwagon. [EACH COMPANY]

Video commerce has risen as an effective breakthrough in the competitive world of e-commerce.

E-commerce operators are using either prerecorded videos or live-streaming video service as a marketing tool to provide precise information about products to online shoppers.

In the past, only a selected number of online retail startups used the tool, but the trend is expanding to retail channels run by bigger counterparts.

SK Planet’s e-commerce arm 11st recently jumped on the bandwagon by teaming up with prominent Korean YouTubers Risabae and Deeva Jessica, both of whom possess more than 700,000 followers on their channels, to make videos about food and makeup products.

“With the rising popularity of mobile shopping, using video to introduce products has become an apt option,” said Kim Moon-woong, a senior vice president at SK Planet. “Video consuming is especially high among people in their teens and 20s. SK Planet will continue to make distinctive video contents targeting these generations.”

Early this month, Ticket Monster launched what’s called TV ON, where certain deals go up online with a video attached. The platform is receiving a positive response not only because it provides detailed information about the product, but also because it gives something more.

For example, in the case of a jeans product, the show host gives tips on how to choose a pair of jeans and how to properly wear them.

According to Ticket Monster, domestic women’s jeans brand O-Ki was promoted by show host Seo Soo-kyung, a stylist for Girls’ Generation, and sold 1,600 units in a single day. That is three times more than what sold without video content.

“Video commerce is effective because it not only gives information about the product, but also offers useful tips and also makes jokes here and there,” said Edgar Choi, a company spokesman. “It has become a sort of entertainment for internet users.”

The service, which according to Ticket Monster is a combined form of home shopping and “My Little Television,” a TV program where celebrities interact with viewers through online chat room, launched in August.

“Travel-related items sold through this program generate revenue that is twice more than what has been made through traditional method of selling online,” the spokesman said.

The 30-minute show which is accessed through the mobile app of CJ Mall, airs 8 p.m. Wednesdays.

As it is an unconventional way of marketing items, CJ O Shopping also tries to provide perks to the selection of the items. In its first episode, CJ O Shopping sold Magic Light, an LED-lit light bulbs that beams out diverse color which can be controlled by smartphones. It once was a highly viral product in Korea. The third episode sold Heelys, a wheel-equipped shoe.

Riding on the positive response, CJ O Shopping attempted another gig, live-streaming one of its beauty-related home shopping program on Instagram. It featured behind-the-scene stories of a home shopping program and provided information about the marketed product at the same time. The home shopping operator said 1,300 users logged into their Instagram channel, giving a major boost to their sales.

“We were able to achieve 1.5 times of our initial sales target,” the company said. “Among those who made purchases, the percentage of people in their 20s and 30s rose by 20 percent when we launched a show.”