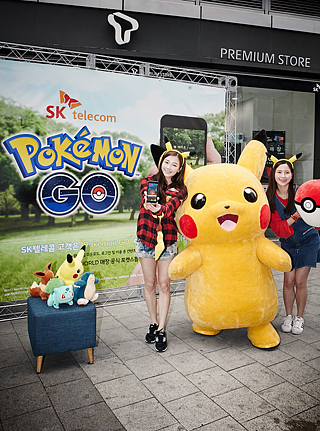 Models with Pokemon dolls at a retail shop of SK Telecom in Seoul promote Niantic’s partnership with the mobile carrier on Monday. [SK TELECOM]

After recent partnerships with 7-Eleven and the Lotteria burger franchise, Niantic, the developer of character hunting game Pokemon Go, has now teamed up with SK Telecom.

The American game developer and the Korean mobile carrier said Monday that they would provide free data to the carrier’s subscribers who play the game through June. Based on current monthly activity, customers may save on an estimated 2.5 megabytes of data per month.

The partnership will also convert all 4,000 SK Telecom mobile phone stores into Pokemon Go gyms for on-screen battles or Pokestops for collecting virtual supplies, starting today, to help players living in areas with few such venues. The more densely populated an area is, the more Pokemon Go gyms or Pokestops.

Those SK Telecom subscribers who make in-app purchases will receive 100 poke coins worth 1,210 won ($1.08) until Friday, on a first-come-first-served basis for 30,000 people. Data needed for downloading the character-hunting game and updating it won’t be offered free, though.

SK Telecom says its partnership with Niantic is for the sake of its future business model centered on augmented reality and indoor positioning technologies.

The telecom operator has been seeking to create its own AR ecosystem - a move rarely seen on the Korean tech scene yet. It launched the so-called T real AR platform, which helps anyone including developers and ordinary individuals develop AR-related content ranging from 3D animation, audio, video, HTML5 to images. The telecom service believes AR will get a boost when the next-generation 5G connectivity becomes available in three years at the latest.

“The most significant element for materialization of 5G service is forming an ecosystem under partnerships with global players,” said Hong Seung-jin, head of marketing strategy at SK Telecom, in a press conference on Monday. “In this regard, Pokemon Go will go beyond just being a game and constitute a key pillar for creating a 5G’s global ecosystem.”

The company vowed to step up cooperation with other leading tech firms home and abroad in the content area.

For Niantic, the partnership with SK Telecom means an increased benefit to its game players.

“We are very pleased to be collaborating with SK Telecom, which is able to well control the AR mobile game network and understands Korean customers’ needs,” John Hanke, CEO of Niantic, said in a statement.

Pokemon Go downloads recently surpassed 650 million in some 200 countries and has attracted avid fans here since its official release here in January. The game added more than 80 types of new characters last month. But its popularity has been waning. Its weekly active users slumped 38 percent from 6.95 million as of early February to 4.28 million as of early March, according to app research agency Wiseapp.

It ranked 17th in the top grossing games category on Google Play and 13th on Apple’s App Store in Korea as of Monday.

Niantic has been constantly forging partnerships - an effort to increase the number of active game players and help partners drive real-world traffic into their stores. The one with 7-Eleven in Korea propelled the number of Pokestops by 8,500 and the other with Lotteria increased them by 2,700 last month. Who pays which expense varies depending on the partnership or sponsorship. Niantic is buying the data offered free to SK Telecom users, for example.

Hanke said at the GamesBeat 2016 conference that paid sponsorships can reduce the company’s reliance on in-app purchases by players to generate revenue.

In a similar deal with SK Telecom, Niantic linked with Sprint, the fourth-largest wireless carrier in the United States, in December to turn more than 10,500 Sprint, Boost Mobile and Sprint-RadioShack stores into Pokestops and gyms.