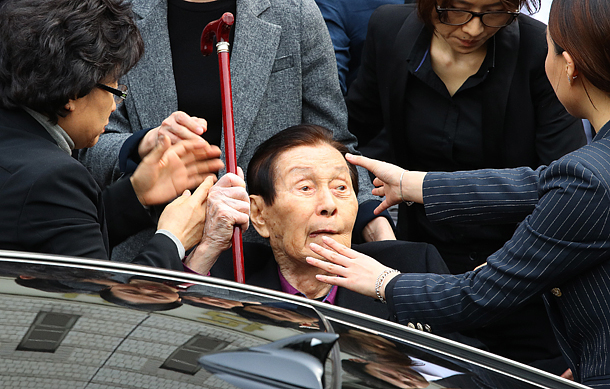 The 95-year-old Lotte Group founder, Shin Kyuk-ho, was tried on Monday for embezzlement, gift tax evasion and breach of trust, but was forced to leave the court within 30 minutes after shouting at the judge and banging his cane on the defense table.

“I am the master of Lotte Group, who can possibly indict me?” he shouted in Japanese as he was pushed out of the court in his wheelchair at the request of the judge.

Shin was indicted for embezzlement, gift tax evasion worth some 80 billion won ($71.5 million) and breach of trust in October.

Entering the Seoul Central District Court on Monday afternoon in his wheelchair, Shin showed signs that he was not fully aware of his situation.

“Where am I?” he asked a court official who was pushing the wheelchair.

When his lawyer explained to him that he is on trial because he was indicted for embezzling company money, he asked the lawyer, “Are you telling me that I have embezzled?”

The judge asked Shin to verify his date of birth but he did not seem to understand the question. His lawyer asked the same question in Japanese, but Shin only asked back, “What?”

Shin then wrote a note to his son, Shin Dong-bin, chairman of the Lotte Group, who is also standing in trial for embezzlement. The note read, “Who indicted me and who are these people here?”

Shin then continued to shout throughout the trial, “Why am I here?” and “Who indicted me!” and banged his cane on the defense table, at which point the judge decided that Shin had openly denied his charges and asked him to leave the court.

As Shin left the courtroom, shouting in Japanese, his son, Shin Dong-bin, daughter, Shin Young-ja, and his common-law wife, Seo Mi-kyung, all indicted for charges including embezzlement and business malpractice, broke down in tears.

The trial on Monday was to confirm the indictment charges of Shin Kyuk-ho, his sons Shin Dong-bin and Shin Dong-ju, his daughter Shin Young-ja, and his third wife Seo Mi-kyung. The Lotte founder and his two sons were indicted in October on various charges including embezzlement, tax evasion and business malpractice.

Seo was indicted in September for tax evasion and Shin Young-ja in July for embezzlement and business malpractice.

Prosecutors said the Shin family embezzled Lotte Group money by putting themselves on boards of group affiliates, when in fact they had not done any work, and being paid handsome salaries. Their salaries for different roles are considered embezzlement by prosecutors. Shin Dong-bin is accused of giving inappropriate stipends worth 50 billion won to his older brother, Dong-ju, and Seo.

Shin Dong-ju, former vice president of Lotte Holdings, was indicted on charges that he received illegal allowances worth 40 billion won from the group in a shady business deal overseen by his brother, Dong-bin.

Seo is facing the same charge for receiving allowances from Lotte Group and not paying taxes for them. She is additionally accused of raking in some 77 billion won of illegal profits by running a store illegally obtained at a Lotte Cinema complex.

Shin Young-ja, former executive director of the Lotte Scholarship Foundation and the first daughter of Shin Kyuk-ho, has been behind bars since a local court granted a pre-trial detention warrant filed by prosecutors in July when she was charged with embezzlement and business malpractice.

Among the five indicted, only the-74-year-old Shin has been jailed. Seo Mi-kyung remained in Japan, refusing the prosecution’s summons until she flew in Sunday. She is barred from leaving the country.