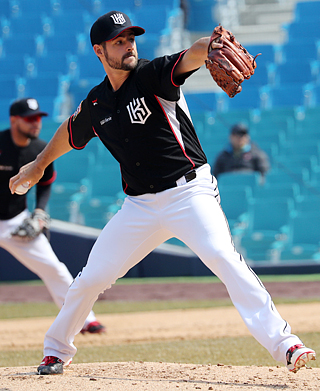 Donn Roach of the KT Wiz throws a pitch in an exhibition game on March 14. [YONHAP]

With one full week of spring training in the books, new imported arms in Korean baseball are off to a solid starts so far.

The Korea Baseball Organization (KBO) clubs are each permitted three foreign players, one of whom must be a position player. All 10 teams have opted to carry two pitchers, tasking them with carrying their rotations through the 144-game grind.

In 2017, 16 foreign players will be making their KBO debuts, and 10 of them are pitchers, some with longer major league resumes than others.

Of those, KT Wiz right-hander Donn Roach has been the most impressive, with the start of the regular season now 10 days away. 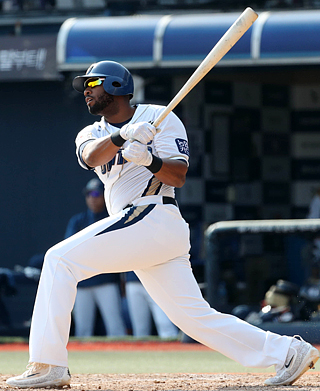 Xavier Scruggs of the NC Dinos hits a home run against the SK Wyverns on Friday. [YONHAP]

He has given up just two earned runs in 11 innings across two appearances, striking out four and giving up one walk. He has scattered nine hits but has retired batters on contact for the most part. Among others, Pat Dean of the Kia Tigers has a 2.45 ERA in two appearances. He held the SK Wyverns to an unearned run in 4 1/3 innings on Sunday.

Carlos Villaneuva, who logged nearly 1,000 innings in the majors before signing with the Hanwha Eagles, has had mixed results so far. He limited the LG Twins to a run over three innings in his spring debut last Tuesday, but allowed three runs on five hits, including a home run, in four innings against the Wiz on Sunday.

His high-profile teammate, Alexi Ogando, was more dominant in his lone spring outing so far. The former Texas Rangers right-hander struck out seven in four no-hit innings against the Wiz on Saturday, touching 150 km/h (93 mph) with his fastball and mixing it in with off-speed pitches.

Ogando will make $1.8 million this season, tied with the NC Dinos’ right-hander Jeff Manship for the largest salary among first-year foreign players. Manship, who pitched in last year’s World Series for the Cleveland Indians, was also solid in his KBO debut, tossing five scoreless innings against the Samsung Lions on Saturday.

Other new faces, Scott Diamond of the SK Wyverns, Sean O’Sullivan of the Nexen Heroes and Anthony Ranaudo of the Lions, all enjoyed scoreless outings in their first spring appearances.

New position players, on the other hand, have struggled for the most part. Darin Ruf of the Lions, the highest-paid among first-year foreign position players with $1.1 million salary, has gone 6-for-20, but doesn’t have a walk. KT’s Johnny Monell is batting .278 (5-for-18) but has one extra-base hit.

Xavier Scruggs, replacing former MVP Eric Thames in the Dinos’ lineup, is 1-for-14, the lone hit being a home run last Friday.