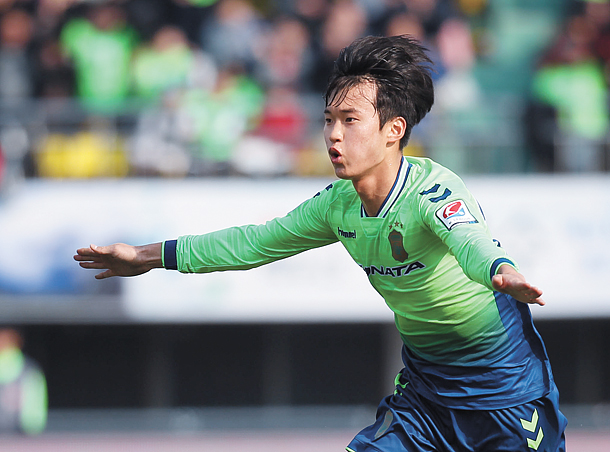 The tattoo on Kim Jin-su’s arm is a four-character saying that means “one can rise again after falling 100 times.” [K-LEAGUE]

Kim Jin-su of the Jeonbuk Hyundai Motors has rejoined the Korean national football team and hopes to help the team advance to the quarterfinals at the 2018 FIFA World Cup, repeating the 2002 World Cup.

While Uli Stielike was struggling to strengthen the left-back with Yun Suk-young and Park Joo-ho, he decided to include Kim on the national team after seeing his outstanding K-League performance from this season. With Stielike’s addition, Kim has returned to the national team for the first time since last March.

So far this season, Kim has scored one goal in the K-League classic season opener against the Jeonnam Dragons and recorded one assist against the Suwon Samsung Bluewings on March 11.

Looking at Kim’s professional football career, he went through the hardest time during his 2016-17 season.

After transferring from Albirex Niigata to TSG 1899 Hoffenhein in 2014, Kim played in the starting lineup for first two seasons.

But when Julian Nagelsmann was appointed as Hoffenheim’s new manager, he was benched for the entire season. Due to this, Kim made his decision to join Jeonbuk Hyundai Motors with a transfer fee of 1.7 billion won ($1.5 million).

“I started football in the fifth grade and it was my first time being benched,” Kim said. “Technically, I took a year off since I didn’t get to play a game for the entire season.”

Kim does not come from a wealthy family; his mother worked at a restaurant and his father was a delivery man. For this reason, he worked hard, practicing at a parking lot even when it was raining and practicing strikes by hitting at empty cans.

When Kim injured his shoulder, he worked on his long distance throws for a faster recovery. He was eventually able to throw from the sideline to the penalty area.

During his A match debut game against Australia in July 2013, Kim successfully made 25 meters (82 feet) worth of throw-ins.

Although Kim is smaller than most other footballers, he has good defensive skills and actively engages in attacks, which earned him a spot on the final roster at the 2014 Brazil World Cup. However, he wasn’t able to join the team due to an ankle injury.

Kim came back from an injury and helped the Korean team finish second at the 2015 Asian Cup in Australia.

“Every time I go through a hard time,” Kim said, “I get stronger.”

Lee Young-pyo, a former footballer, was the Korean football team’s starting left-back for a long period. Until he retired in 2011, Lee played in 127 A match games.

Since he retired, the team was unable to find a footballer that has the ability to replace Lee. And of the many left-back footballers hoping to be the next Lee Young-pyo, Kim is one of them.

Kim is expected to play as a left-back for the Korean team’s sixth qualification round match against China on Thursday. The Korean football team is currently ranked second in the FIFA World Cup Asian qualification Group A with three wins, one loss and one tie. The team has lost six points in five games.

Despite the tension between the Korean and Chinese government over the deployment of the Terminal High Altitude Area Defense (Thaad) battery, the 2018 FIFA World Cup Asian qualification match will resume on Thursday as the Korean football team will play against China at the Helong Stadium in Changsha. Though it is a sensitive political issue, fans have not linked the issue with the World Cup as tickets for the qualification games have been sold out.

“I was a little worried but the people were very welcoming,” said Koo Ja-cheol, who joined the Korean football team on Monday. “I got more positive energy from them.”

The match against China may be the most important game for Korea - the team is one point away from Iran, point leader in the group, and one point ahead of Uzbekistan.

While China sits last in the group, it brings concerns to Stielike as the Korean team has not yet won an away game and China has never lost a game at the Helong Stadium; they recorded four wins and four ties from its eight previous A match games.

The top two teams from each group in qualification round will earn automatic spots onto the World Cup in Russia.

The game will be broadcast live on JTBC, affiliate of the Korean JoongAng Daily, at 8:35 p.m. on Thursday.