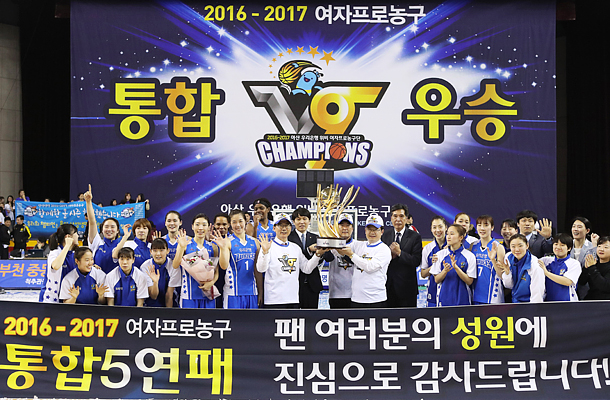 The Asan Woori Bank Wibee wins the Championship series for the fifth consecutive year by winning against the Yongin Samsung Blueminx on Monday. [YONHAP]

Asan Woori Bank Wibee of the Women’s Korean Basketball League (WKBL) have successfully managed to win both the regular season and the championship series for the fifth consecutive year.

Wibee was declared the champion as they won against the Yongin Samsung Blueminx 83-72 in the extended quarter of the third championship game. The championship series is played in a format of five games. The team that wins the first three games wins the series, but the five games scheduled for the series were not necessary as Wibee did not allow Blueminx a win.

Wibee has been undefeated since the 2012-13 season and has won its ninth championship game, the most in WKBL history, and have won both the regular season and the championship series eight times.

Aside from the championship series, Park and Jones played a significant role in the team’s success this season as they set a near-perfect winning percentage of 94.3 in the regular season.

Though the two players were crucial to the team’s success, Wie Sung-woo, head coach for Wibee, chose Lim Young-hee, the oldest member on the team, as the true MVP.

In the extended quarter on Monday’s match, Lim scored four points to help the team win. Lim is the second oldest player in the WKBL, after Huh Yoon-ja of the Blueminx, and plays each game with fighting spirit. In addition, Lim played the season with a nose injury.

Although she didn’t play full-time this season, she still managed to record a scoring average of 12.6 points, 11th in the ranking, with 3.8 assists, fourth in the WKBL.

When Lim made her professional debut in 1998, she was a substitute player for 10 years. But her skills excelled as she signed with Wibee in 2009. In November 2016, Lim became the fifth player in the WKBL to play in 500 games.

“She always lead younger players on the team and is the first one to act,” Wie said. “I’m thankful to have a player like Lim on the team.”