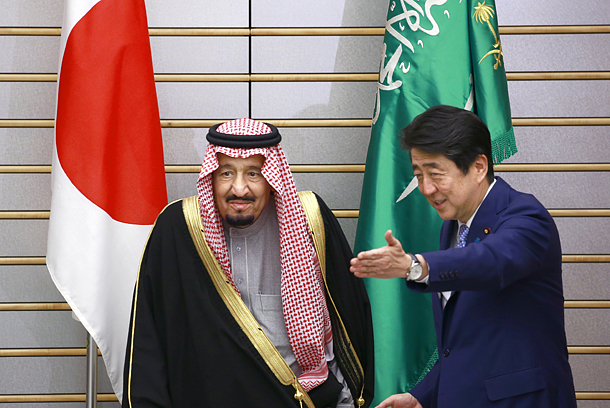 Last week, I saw a man coming down a golden escalator from an airplane instead of stairs for the first time. He was Salman bin Abdulaziz Al Saud, the 82-year-old king of Saudi Arabia. As he toured six Asian nations over a month, visiting Malaysia, Indonesia, the Maldives, Brunei, Japan and China, the escalator brought in from Saudi Arabia appeared.

Moreover, he rides on a 1.5 billion won ($1.34 million) special bullet-proof Mercedes-Benz sedan, which is 30 percent more expensive than the one U.S. President Donald Trump uses. Twenty-five princes and 1,500 delegates accompanied him on the trip. For the dinner banquet at the Indonesian Presidential Palace, a 4-kilometer-long motorcade of 750 cars made a spectacle.

King Salman does not travel abroad much. It is his first visit to Japan in 46 years and China in 11 years. But once he goes, it involves major deals. He promised 8 trillion won and 17 trillion won in investment to Malaysia and Indonesia, respectively. China got a 28 trillion won investment deal. He also promised to list Aramco in Tokyo, which will be the biggest IPO in the world. The Saudi Arabian oil company is valued at as much as $2 trillion. If Aramco is listed on the Tokyo Stock Exchange, Japan will enjoy great financial vitality.

But Korea missed the opportunity. Korea is the fourth biggest importer of Saudi oil and one of the major Asian customers. But King Salman did not stop in Korea because of the political instability. Even if he had visited, he wouldn’t have been able to make a deal. So Seoul asked Minister of the Economy and Planning Adel Fakeih, one of the 10 ministers accompanying the king on the trip, to come to Korea before visiting Japan. A meeting with our Deputy Prime Minister for the Economy Yoo Il-ho was arranged. But when Yoo asked him to allow Korea to participate in Saudi’s metro project, Minister Fakeih responded that Korea first should buy Saudi’s sovereign fund. Rather than receiving a gift of investment, Korea got lectured by a minister.

“Passing Korea,” which refers to skipping a stop in Korea, is an inevitable offshoot of our foreign ministry arranging former President Park Geun-hye’s private plastic surgeon’s trip to the Middle East, exaggerating diplomatic deals, failing to see outcomes and focusing foreign policy on relations with China and the United States.

Korea’s diplomacy with the United States is even more pathetic. In an interview before U.S. Secretary of State Rex Tillerson left Korea last week, he discussed his unpleasant experience. He said that he was never invited to a dinner banquet, but as the Korean authorities realized at the last minute that it did not look good publicly to skip the dinner, they announced that Tillerson himself was too tired to attend a banquet.

Even during the Roh Moo-hyun administration, when more anti-American remarks were made, the U.S. government never publicly admitted displeasure. While the foreign ministry claimed that there must have been miscommunication, it is too late. The world already knows how clumsy the Korean government is.

Of course, it could have been caused by a mistake in the working-level communication. But regardless of where the faults belong, Secretary Tillerson’s unprecedented remark shows the confusion in Korea-U.S. relations, unorganized communication and degenerating alliance. That is another case of “Korea passing.” As if apologizing to Secretary Tillerson, foreign minister Yun Byung-se is headed for Washington D.C. only four days after the meeting on March 21 to attend the anti-Islamic State conference. While frequent contact is desirable, uncomfortable feelings still remain.

What’s more concerning is the discrepancy between the hardline North Korean policy direction of the Trump administration and the stances of opposition presidential candidates. When the Trump administration wants to “multiply” on the existing North Korean policy of “sanctions and pressure,” Korean candidates advocate “take away” or “division.” Korea and the United States may collide before U.S.-North or U.S.-China clashes. Then, we may experience the biggest crisis in 64 years of the Korea-U.S. alliance, not to mention “Korea passing.” Are Korean presidential hopefuls willing to take such risk?