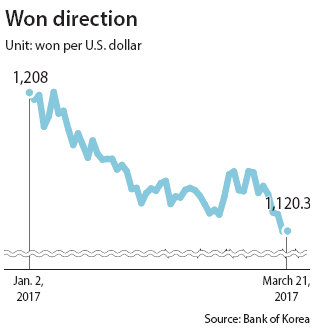 The won is on a winning streak.

In recent weeks, Korea’s currency has been rallying against the greenback, bolstered by an influx of foreign capital and widespread sentiment that the central bank might not intervene in the country’s foreign currency market through next month.

The Bank of Korea occasionally conducts so-called smoothing operations to stabilize volatile movements, especially steep appreciation of the won against the dollar, but such actions could be limited with the U.S. Treasury set to release a report next month on foreign exchange policies.

The won closed at 1,120.3 against the dollar on Tuesday, up 0.2 won compared to the previous trading session. Although Tuesday’s close represented a slightly weaker won, the Korean currency has overall been strengthening against the dollar this month. The won-dollar rate fluctuated between 1,140 and 1,150 won through mid-March before closing at a five-month low of 1,120.1 on Monday. Early in the trading session on Tuesday, the exchange rate even hit the 1,110 mark.

Sung In-sun, an economist at Shinhan Investment, attributed the more favorable rates to less fear about the Bank of Korea intervening in the exchange market. Concerns that Korea might be named a currency manipulator in the U.S. Treasury’s upcoming April report have put the central bank’s moves in check.

Sung also noted that dovish comments by the U.S. Federal Reserve during its March committee meeting would tamp down the dollar’s strength.

“The U.S. dollar extended its decline on expectations of a gradual Fed policy normalization,” Sung said. “Charles Evans, president of the Federal Reserve Bank of Chicago, said that two more rate increases are possible this year if the U.S. economy continues to make progress.”

Other factors dragging down the dollar include the G-20 finance ministers’ tepid commitment to free trade and trade protectionism in the United States, the economist said.

Min Gyung-won, a researcher at NH Futures, echoed that sentiment, saying market circumstances are in favor of a stronger won.

“The issue of the April report, the influx of foreign capital and concerns from the U.S. about trade protectionism will all contribute to a stronger won against the dollar,” Min said.