Coca-Cola to save water in Pyeongchang

Coca-Cola to save water in Pyeongchang 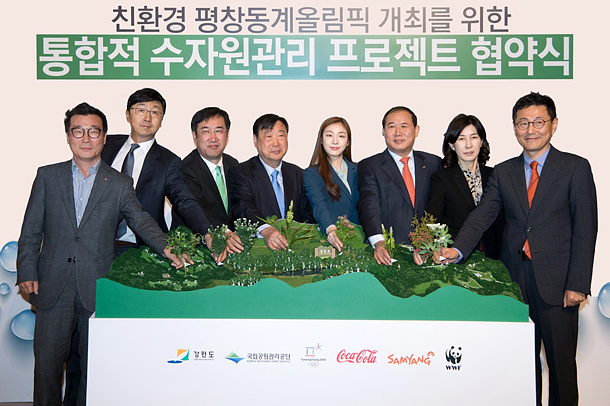 With less than a year until the 2018 PyeongChang Winter Games, global sponsors of the Olympics are lining up plans to support next year’s big event.

The latest partner is Coca-Cola, which pledged on Tuesday to support management of a water resource site inside host city Pyeongchang’s Odaesan National Park in partnership with the Korea National Park Service, provincial office of Gangwon and World Wildlife Fund.

The project is part of a global campaign by Coca-Cola to return the same amount of water it bottles and uses in the manufacturing process to nature. Through the project, Coca-Cola has developed forests and preserved water resources based on the needs of each region involved.

The campaign’s ultimate goal is to bring the water replenishment rate in Korea to 100 percent, that is, returning all the water that Coca-Cola uses back to nature, by 2025 starting in Pyeongchang.

“After the 2018 Olympic Games are over, we will continue efforts to manage the water in this area and implement more eco-friendly projects in the country,” Coca-Cola Korea general manager Paul Yi said Tuesday after a memorandum of understanding was signed with government officials.

The project site in Pyeongchang is located on a 1-acre piece of land includes the Songcheon Mineral Spring, which gets its water from the nearby Sohwangbyong mountains. The spring provides water to Daegwallyeong Samyang Ranch, owned by food manufacturer Samyang Food. The ranch is home to many endangered animals, including the colorful mandarin duck.

Coca-Cola says its aim is to preserve the area and improve its greenery to ensure safe water resources and habitat diversity.

“The PyeongChang Olympics may turn out to be a more meaningful one if it can be held as an ‘eco-friendly’ Olympics,” said figure skater Kim Yuna who is also an honorary ambassador for the PyeongChang Games.

Other worldwide partners for the Olympics include electronics giants Panasonic and GE and watchmaker Omega.

Omega, known as the official timekeeper of the Olympics, unveiled a countdown clock on Feb. 8, exactly one year before the opening of the PyeongChang Games.

GE Korea will offer energy, lighting and health care infrastructure for athletes that take part in the Games.

These Olympic partners are the biggest contributors to the international event and have signed four-year contracts directly with the International Olympic Committee.

The next biggest contributors have contracts with the PyeongChang Organizing Committee, including so-called official partners, whose donations surpass 50 billion won ($44.7 million), sponsors with 30 billion won, suppliers with 10 billion won and supporters with below 10 billion won.