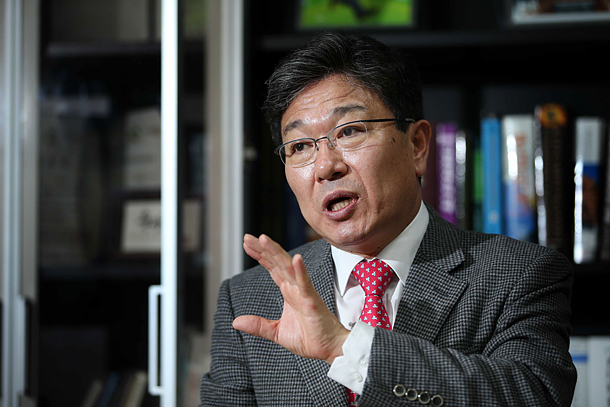 China’s opposition to Korea’s decision to deploy the U.S. anti-missile system known as the Terminal High Altitude Area Defense, or Thaad, becomes more aggressive each day. In addition to the economic backlash and banning tours to Korea, China is even putting restraints on the World Cup qualifying match between China and Korea, which is set to take place in Changsha, China, on March 23, by barring the Korean national team from travelling via chartered plane.

Such retaliation is expected to be protracted, putting the Korea-China Free Trade Agreement, considered the biggest in volume in Northeast Asia, in crisis with Korean conglomerates such as Lotte finding it more difficult to conduct business on Chinese soil.

JoongAng Ilbo met with Yoon Sang-jik, the former minister of Trade, Industry and Energy, who assumed command during the three-year process of re-negotiating and putting into effect the Korea-China Free Trade Agreement, to discuss the background behind China’s retaliatory moves and how the Korean government and companies may cope with the current situation.

Q. China’s retaliatory actions are getting more aggressive. Was this something expected?

A. First of all, what the Chinese government does is problematic as it is essentially the interference in the domestic affairs of another country. China had conflict with Japan and the Philippines in the past, but they were territorial disputes, completely different from the conflict between China and Korea over Thaad. Our government did anticipate that the deployment of Thaad may put China on edge, but we didn’t know China would assume such extreme measures.

There are some projections that the Korean economic growth rate may go down as much as 1 percentage point because of the drastic fall in the number of Chinese tourists. What do you think about this?

Such calculation is based on the estimation that Chinese tourists spend about 7 billion won ($6.3 million) all together, and this is somewhat exaggerated. There are many Chinese who travel to Korea individually rather than in groups. If the situation gets any worse, China will also end up taking a hit. China is Korea’s top export destination and Korea is China’s fourth, meaning the economies of the two are closely intertwined. Items such as semiconductors and displays are examples [of China’s main imports from Korea].

These goods are hard to substitute with the products from other countries. Cultural contents and tourism are similar. While 8.06 million Chinese tourists visit Korea, about 4.50 million Koreans visit China, meaning the worse the ties and people’s sentiment towards one another, the bigger the damage for Chinese, as well.

So is China being penny-wise and pound-foolish?

It looks like the Chinese government considers economic pressure as the only way to send a message to Korea. However, economic ties between the two countries aren’t unilateral. China has to import Korean materials and parts to be able to export. China also has to consider the 1 million Chinese expatriates in Korea.

Do Korean companies have other investment options?

India and Vietnam are major alternate markets for Korean companies. The bottom line is, China has much to lose if it continues its economic retribution. Furthermore, Chinese President Xi Jinping said China will champion free trade when U.S. President Donald J. Trump pushed forward with his “America First” policy, which means if China continues its economic retaliation, it is just contradicting itself and losing face as a global powerhouse.

Disunity in Korea also seems to be a problem. Are we just giving an excuse for China to reinforce its actions against us?

This is something that I discovered while negotiating the terms of FTA with China. When China is on the negotiating table, it will exploit the internal affairs of counterparts as much as possible. In the process of negotiation, China will monitor various local channels, including the media and civic groups. Concealing its own weaknesses, it will exploit the weaknesses of its counterparts, using any reports or claims by local media and civic groups it finds. Internal division is Korea’s Achilles heel. Some lawmakers of opposition parties talked about Thaad in China but we have no way of knowing what they discussed.

Politicians such as Seongnam City Mayor Lee Jae-myung and former leader of the Minjoo Party, Moon Jae-in, are opposed to the deployment of Thaad. With leading presidential candidates against Thaad, wouldn’t it be more difficult to persuade China?

The deployment of Thaad has already been decided, and considering the security of the country, the nation must speak in one voice, regardless of one’s political allegiance. There are more issues to come other than Thaad and we cannot be dragged around by China each time. One of the things I found regrettable while working for the government was China’s inaction towards North Korea and its nuclear program. It is understandable that China sees the North as vital, but this is a difficult situation.

During the Senkaku Island dispute, Japan strengthened its ties with India and Vietnam, who were in a state of tension with China. Can Korea learn something from this?

Korea has a reliability issue (on China) more than anyone else and must be quick in finding alternate markets. We must expand ties with India and Vietnam and overhaul our economic structure in the long run. Second of all, given the current condition, it’s about time we take standard measures to respond. The government must file complaint to World Trade Organization and Lotte Mart must consider investor-state dispute (ISD) settlement in line with Korea-China FTA.

Do you think the situation has reached that phase?

The WTO regulation stipulates that a company investing overseas through FTA may file a complaint if it deems its rights have been violated by the host state. It would be quite the embarrassment for China to go through an ISD settlement for violating the rights of foreign investors, since foreign investment is a big part of its economy. China may be at big loss, since other companies may follow suit. Korean companies must exercise their rights.

Could China find any loopholes citing its domestic regulation, such as fire safety inspection?

It may be able to get away with that for just one branch. It could [order the store to shut down] as a corrective measure. But the Chinese government ordered more than one-third of Lotte Marts, a quintessential case for ISD. It could become a bigger problem if Lotte decides to pull out of the Chinese market or sell its stores.

Has Korea always had a risk during the past 25 years of diplomatic relations with China?

Korea has always been vulnerable, relying 25 percent of its export on China. We have been trying to revamp our export structure from capital goods and raw materials to consumer goods but we need to speed up the transition. China can easily replace the source of capital goods and raw materials which is why we must export more consumer goods. We hoped that the Korea-China FTA would deepen our ties and make the trade structure sound. A number of companies joined in, producing consumer goods, which means any imposition of regulatory control is that much more difficult.

So the problem is, about 94.6 percent of Korean exports to China are capital goods and raw materials, while only 5.4 percent is consumer goods.

That’s why we’ve been bulking up the volume of export in cosmetics and cultural content such as movies and dramas. The strategy is to go through Chinese and Southeast Asian markets before going global. For the industry to grow, there is no better test bed than the Chinese market. Nondurable goods to tackle the Chinese market include not only cosmetics and food, but also medicine and daily necessities.

China is rapidly catching up on technologies that go into raw materials and replacing imports with materials produced on its own. What can Korea do?

This is something we’ve expected from the start. Just as Korea caught up to Japan, China has been a fast follower. The biggest issue here isn’t whether China can catch up but whether it gains enough competitive edge to become the first mover. It all comes down to the competence of Korean companies and this is why we pushed ahead to sign the FTA. In the converged market, Korean companies can expand the playground by advancing into the Chinese market.

Still, the Korean manufacturing sector must have competitive advantage over China. How can we do this?

There are still some fields that China lags behind in which Korea must step up to become the first mover. In the existing fields, China will catch up soon and take over. But Korea has certain advantages. For instance, it has 50 million people living in a small land, which means companies can virtually test everything. This is especially the case in the Fourth Industrial Revolution. Another advantage is that Korea is the only country that can cover both the U.S. and Japanese markets.

How would re-shoring work?

It wouldn’t work so well in Korea. Capital-intensive industry focusing on heavy infrastructure investment has limited job creation effect. There is also the issue of the labor union for the automobile industry, which is precisely the reason behind Hyundai not building another domestic factory for the past 20 years. The flexibility of labor market should come before re-shoring.

But isn’t it a problem that the Korean manufacturing sector as whole is losing ground?

It’s a fact that heavy industries are relocating to lower wage countries. If we look at advanced nations, the industries they have now are core parts, materials, design etc. They are not capital heavy industries. Korea can no longer build bulk carriers to transport grains or coal. Even if we make similar products as China, we need to develop them and focus more on engineering. Korea should give up the industries that China always caught up on and move to sectors with higher value.

To do so, we need de-regulation and new industrial growth and job creation, but that seems to be stuck.

It’s quite frustrating that the National Assembly stands in the way. Employment issues should transcend political ideology. This will continue to burden our society and undermine the competitiveness of Korea. Regardless of political ties, we must come to an agreement. I digress a little, but some people say that late president Roh Moo-hyun did the most deregulation in Korea. It was the Roh administration that authorized the LG Display complex in Paju, Gyeonggi, the Samsung semiconductor factory in Pyeongtaek, Gyeonggi and enabled the Korea-U.S. FTA. This is the reason why Paju and Pyeongtaek are so crowded now.