Unstoppable duo is leading the way : The stars of ‘Part-Time Spy’ on getting into character, friendship and variety show appearances

Unstoppable duo is leading the way : The stars of ‘Part-Time Spy’ on getting into character, friendship and variety show appearances 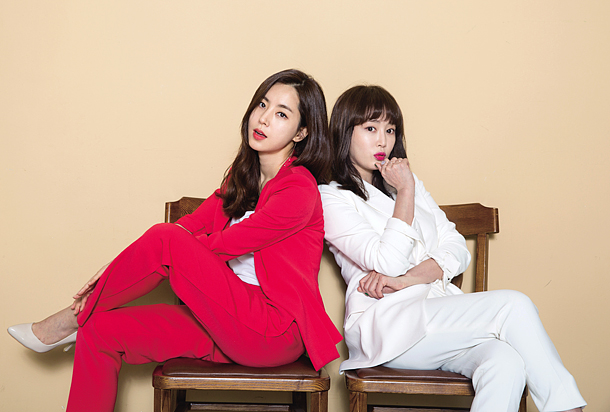 Han Chae-ah, left, and Kang Ye-won sat for an interview to talk about their roles in “Part-Time Spy.” [STUDIO 706]

Besides being known for her beauty and stylish looks, 34-year-old actress Han Chae-ah is also known for her candidness. She recently generated buzz online by revealing that she is dating the brother of retired professional soccer player Cha Doo-ri during a press preview for “Part-Time Spy.” She maintained her straightforward and candid attitude during a recent interview with Magazine M, an affiliate of the Korea JoongAng Daily.

Han’s personality seems to match her role as a straightforward policewoman in the new action comedy movie. Though having to play a foul-mouthed character required a lot of practice, Han says it was still an enjoyable experience.

Q. In the newly released movie “Part-Time Spy,” you play the role of Na, a policewoman.

A. For a more dramatic introduction, I present myself as a lunatic at the National Police Agency. Basically, I am a short tempered policewoman.

In a TV series a couple years ago, you played the role of a rare beauty from the Joseon Dynasty (1392-1910). How do you feel now that you have to play a dramatically different role?

I would not say I have multiple personalities inside me. But, when I play a certain role, I try to bring out the best I can in that role. The shyness in the role of the rare beauty is a part of me, but at the same time, the laid-back personality in “Part-Time Spy” is also me.

The scene when you first appear is striking. The script reads ‘After suppressing a robber, Na bends down on the ground to pick up her hat. Her beautiful face, her glamorous body... When she sweeps her shining hair, the robber and people around them are taken aback.’ When you see this line, don’t you think that this is a piece of cake, because not much acting is needed?

That is nonsense. When I film these kinds of scenes, the staff and supporting cast watch me and react wildly, which is a lot of pressure. In that scene, I barely had makeup on and was in my workout clothes. I am afraid the viewers might not have similar reactions (laughs). It is tough to be cute in front of cameras. 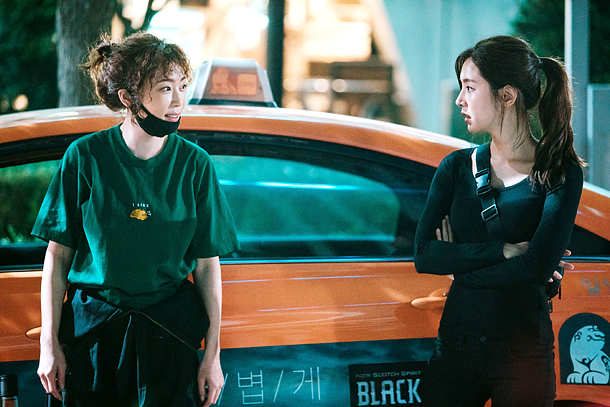 Does playing the role of an eager policewoman involve a lot of action scenes?

How did you film scenes where you use curse words a lot?

For the acting to seem natural, I tried my best. The male staff taught me a lot of curse words, and I asked them which one would sound better.

How does it feel to swear in front of a big audience?

For the first time, I realized that I am able to express my emotions through acting.

It looks like you and Kang Ye-won are really close. As this comedy is about a female duo, the bond between the actors would be important. Did you intend on getting close with Kang?

It wasn’t very difficult to do so. We are not the kind of people who fake a smile. After the movie shoot, we went to Busan, and even went to the sauna together. We even take flower arrangement classes together.

Are you the type of person who is obsessed with box office records?

I think I am. I hope this movie creates a boom of female duos. Rather than chasing after fame, I want to work in an environment where various roles and diverse genres of movies are assigned to actresses. Of course, I hope this movie turns out good and hope to be in movies that I want to be in.

What kind of movies do you want to be in?

Like in the movie “Colombiana” (2011), I want to play a fierce role where the actress dresses in tight black body suits, escapes from narrow spaces, knocks down a gang leader with a towel, and falls in love with the male character. I really love that film.

You have been active in variety programs. Do you hope to become a star in that genre as well?

Honestly, when I go on variety programs, I feel like I am wearing a suit that doesn’t fit me. I feel a lot of burden. I feel more comfortable filming movies where I erase myself and just act based on what it says in the script. Viewers might think that how the actors behave on variety programs are their real personality, but a lot of it is based on a script as well. I feel uncomfortable that while I am following a script, I have to act like this is my real personality.

Would you say you are cut out for acting?

I enjoy acting. It gives me joy and thrills. When I see a good scene or line, I am delighted, because I want to try my best. I wouldn’t say that I am a sensitive person, but I am when it comes to acting.

It looks like you don’t like being cheesy or faking your personality. Other actors are very into beautifying themselves. 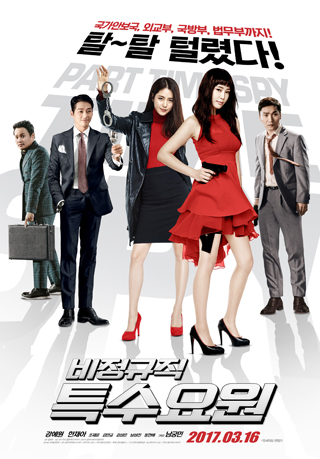 Intentionally trying to look unfashionable is no easy task for an actress, especially when their co-star is playing a beautiful character. However, looking less attractive in “Part-Time Spy” was not a problem for Kang Ye-won, who co-stars with Han Chae-ah in the action comedy.

Following the joint investigation of a clumsy contract worker for the National Security Agency (Kang) and a hot-tempered policewoman (Han), the film comically portrays the struggles of contract workers.

“Though the movie comically deals with an unrealistic incident, I believe the background of the film (the struggles of contract workers) is highly realistic,” Kang said during an interview with Magazine M.

Kang, 36, who debuted 15 years ago, has become a more familiar figure over the last few years through her appearance in reality programs like MBC’s “Real Men” (2013-15) and the ongoing second season of KBS2’s “Sister’s Slam Dunk.”

To discuss her career and her newest film, Kang sat down for an interview. Below are edited excerpts.

Q. What drew you to join “Part-Time Spy?”

A. I could deeply sympathize with my character (Yeong-sil). I think I was more drawn to the film because my younger sister used to be a contract worker. I wished to speak for those contract workers [who feel insecure for their job’s instability]. I hoped [I could help them] not to give up their vision.

How did you try to portray your character?

I couldn’t easily understand who she is when I just read the script. So before the shoot began, I went to New York. There, I dropped by a number of vintage shops and purchased various items that seemed out of fashion because I thought it would be a good idea to reveal Yeong-sil’s personality through her look.

Why did you pay so much attention on the character’s appearance?

How you look is very important in Korean society. I wished to portray someone who can’t get along in the organization she belongs to through her look. It was a good choice because I could better concentrate on portraying the character with that image.

Is there any part of the film you wanted to emphasize?

In terms of my character, her biggest goal in life is to quickly become a regular worker and live a stable life. It is inevitable for her to feel insecure for not having a proper job or a boyfriend, which is kind of how I feel right now (laughs). Throughout the film Yeong-sil grows to become more active and courageous, and I wanted to highlight that change.

How was working with Han Chae-ah?

I wanted Chae-ah to feel comfortable at the shoot. We gradually became closer to each other as we worked together. Just when we became good friends, we shot scenes that depict our friendship. I think some sensitive viewers probably would have noticed that us two are actually very close in reality.

Were you not jealous about Han being depicted more beautifully?

As an actress and as a woman, the feeling that I wish not to have is jealousy. As I live, I will see a lot of people who are younger and prettier than me. There wouldn’t be an end to it if I start feeling jealous towards them. Most importantly, someone who is jealous is probably in pain.

You practice to become a member of a girl group [with other participants] in the second season of “Sister’s Slam Dunk.” How do you feel about appearing in the show?

Singing has always been very stressful for me. But I suddenly wanted to sing again after watching Damien Chazelle’s “La La Land” (2016). So the program is very special to me for allowing me to sing in front of people again. I shoot the show twice a week, and I feel very excited every time because it shows who Kang Ye-won is as a person instead of an actress.

Are you not afraid of being perceived as an entertainer instead of an actress?

There’s no change in heart about my determination to be a good actress. Though acting is crucial as an actress, who Kang Ye-won is as a person is also as important. In order to not have any regrets in the future, I want to put effort into what I want to do.

Do you have any plans for your next project?

Nothing has been determined. I guess I actually became an irregular worker (laughs). I wish to take part in something that deals with realistic love. Like “Girls’ Night Out” (1998) and “Purpose of Love” (2005), I like films that touch on the many aspects of love.