Understanding the nation’s reluctance to read : Citing lack of time to enjoy books, many turn to movies, theater

Understanding the nation’s reluctance to read : Citing lack of time to enjoy books, many turn to movies, theater 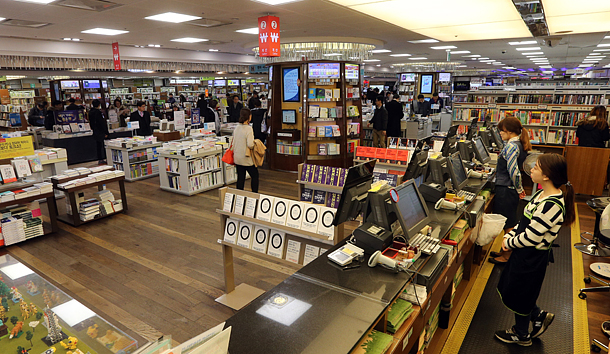 Koreans have grown more and more reluctant to read books over the years. Though visitors often crowd local bookstores, most of them leave after scanning the shelves, according to a manager at a local bookstore in Seoul. [JOONGANG ILBO]

At the turn of every new year, many Koreans put reading at the top of their list of resolutions. This year was no exception as “reading more books” was Korea’s most popular New Year’s resolution, beating out exercise and travel, according to data compiled by Nielsen Korea. Despite strong determination to read more books, the number of publications read annually seems to have fallen over the years.

The average amount of money a household spent monthly on books in 2016 was 12,066 won ($9.50), according to figures published by Statistics Korea earlier this year. The amount is lower than 18,108 won, which was the average price of newly-published books in 2016, and only slightly higher than the 11,000 won average price for a movie ticket.

The data showed that the monthly spending on books has dropped for six straight years since 2010. The total spending has dipped approximately 5,500 won since 2010, when the average household spent 17,939 won on books per month.

A biannual report on reading habits, published by the Ministry of Culture, Sports and Tourism in January 2016, stated that Koreans’ reading rate (the proportion of people who read at least one book a year) accounted for 94.9 percent for students aged between 10 and 18 and 65.3 percent for adults aged above 18. The data was collected from surveys taken in 2015 by 3,000 students and 5,000 adults. The figures showed a great drop, especially for adults, from when the data was compiled in 1994, in which the reading rate for students was 97.6 and 86.8 percent for adults.

Even among OECD nations, Koreans’ reading rate (74.4%) was lower than the OECD average (76.5%), according to the report.

Too many options, too little time

A 24-year-old university student named Han Ji-eun says she simply does not have enough time to read books. “I read one to two books a year. I just don’t really get to reach out for books because it takes me too long to read, and the slow reading pace frustrates me. It also takes away my time to study.”

Han, who is currently searching for a job as a reporter and dreams of becoming a cultural critic one day, says that she instead watches around one to two movies per month and at least six episodes of television dramas every week.

In an effort to read more books, Han recently formed a study group, where members read one book per week and hold discussions. But what drove her to join the group was not to develop a habit of reading, but rather to prepare for an essay test she needs to pass to become a journalist.

Similarly, it is not easy for 31-year-old male IT worker Shin Dong-min to read books. “I used to read a lot in my 20s, especially when I was serving in the military. Back then, I read about 10 books per month. But now, I read two to three books a year at most.”

When asked why, Shin laughed and said, “There are simply too many things to enjoy. When I have spare time I choose to either go out on dates with my girlfriend or watch films or dramas because the development of the story is a lot faster than when I read books. Also, all I have to do to enjoy [movies and dramas] is to simply open my eyes whereas to read books, I have to think and focus.”

Choosing to enjoy their spare time with the least amount of effort is commonly found among younger people, according to a manager surnamed Kim, who has been working as a manager at the Konkuk University branch of Bandi & Luni’s bookstore chain for longer than two decades.

“People these days, especially younger people, have not formed a habit out of reading because there are simply too many entertaining activities they can do at low costs. Unlike in the past, when movies or musicals were enjoyed only on special occasions, these forms of entertainment have become a part of many people’s daily routines due to a changing culture and the prevalence of smartphones.

“The trend to sell stationery became evident starting three to four years ago. Unlike in the past, when bookstores were completely filled with only publications, the proportion of books and stationery now in bookstores seems to be around 6:4, including at the location that I’m working at.”

When asked about the crowds that often fill up bookstores, Kim responded, “Lots of people drop by bookstores because many of them are located inside a department store or shopping complex, but the majority of the visitors leave after simply scanning the place. At our bookstore, fewer than one out of every ten visitors purchase books.”

Even without reading books, Shin Dong-hyeong in his 40’s says he can still find a lot of information on the internet.

“Of course I rely on the internet to find information. I’m aware that a lot of information on the internet is inaccurate, but I can search for accurate information. For example, I’m very interested in immunology, so I find thesis papers on immunology online. There are a number of websites like PubMed that provide free theses. If I have questions about the theses I read, I look at the references and research further on the internet,” said Shin, who works at SK Chemicals.

An avid reader named Cheong Koo-seong, 40, who used to work as a career counselor at Sogang University, spoke similarly of the internet.

“When I search for information, I look up at websites of foreign research institutes, [where I can find credible information]. Or I refer to Facebook links that my acquaintances post online. Cheong continued, “There are also a number of online forums where people with common interests gather to share information. Though I don’t take part in those kinds of forums anymore, there are a lot of them dealing with diverse topics from iPhones to Teslas.”

Even those who frequently read say they turn to books to fulfill a specific purpose other than just reading for pleasure. Ji Sung-bin, a 25-year-old law school student reads at least 100 pages a day. Though it may sound like a lot, most of the publications he reads are confined to law books, which he reads to study for school.

Ji is not the only one reading books for a specific purpose, as a growing number of teenagers, fiercely competing to be accepted into a handful of spots at prestigious universities, read to write book reviews that are put into their student records. The records are crucial as academic performance plays an increasingly large part in the university’s evaluation system.

“Preparing for the university entrance exam 10 years ago and now is very different because the college entrance exam is not as important as it used to be,” said Kang Jeong-hoon, who teaches history at Anyang Foreign Language High School.

“Because the student file has become a crucial standard of evaluation for universities, I have even heard about the existence of academies that help students ‘fake-read’ by writing reviews for them or summarizing the book.” Kang continued, “Since the college entrance exam is not as important as it used to be, students today actually do have time to read books if they want to. It all depends on what they value.”

Lee Seong-min, an 18-year-old high school student who was recently honored with a prize for his book review at Kwangyoung High School, agreed.

“I believe as long as you try to read much, you can read a lot at school between classes, which many of my friends find difficult to do [because they feel so tired from studying]. However, I can read up to two books a day if I try really hard. But I can’t disagree that I read a lot so that I can write book reviews, which will be recorded in my school file and will eventually help me get into a better university.”

Anyone who has been to Wangsimni Square in Seongdong District, eastern Seoul, in the last five years probably remembers seeing the bright red empty phone booth placed in the corner. Named Chaektteurak, which means a garden of knowledge in the heart of readers, the place is filled with books for anyone to enjoy while they spend their time at the square. Running on an honor system, it was installed by the local government to encourage people to read more often.

Another attempt made by the government to foster a reading-friendly environment is providing free books in exchange for a receipt from a movie, play or exhibition. Organized to help small publishers that have been struggling financially after the bankruptcy of Song-In Books (the country’s No. 2 wholesale company) in January, the service is provided at seven temporarily designated bookstores nationwide. The so-called Doggaebi (goblin) service began in February and will return again next month.

Despite these attempts, the effects of these programs are limited. Most of the books that fill Chaektteurak are unclean and old, and the Doggaebi bookstore program is only temporary.

Instead, many Koreans have appealed for the need to revise social structure and the environment.

Cheong Koo-seong pointed out the need to change the culture around reading by increasing the accessibility of books.

“When I was living in San Diego, I was surprised to see that children perceived the library as a kind of a playground. In Korea, you usually have to plan days before to go to a library, but there, it’s simply on your way to going elsewhere.

Cheong continued, “Librarians often call children by their names and ask friendly questions like ‘Did you finish reading the book that you borrowed?’ Mothers can leave children to be read books by a librarian while she herself also reads.”

“In order to encourage people to read, an atmosphere that fosters reading needs to be created, but Korea lacks this,” said Shin and continued, “As far as I’m concerned, Koreans work the longest hours out of the entire OECD nations, depriving them time to read.”

Last year, Korea had the second longest average working hours of all 35 OECD nations after Mexico with 2,113 hours, which far exceeds the OECD’s average 1,766 hours.

Shin, who is a father of two elementary school kids, complained, “I simply don’t have enough energy to read books after working so long. Things aren’t much different on the weekends, as I have to look after my kids.

“I think this is a problem of social structure. Though some bookstores like Kyobo Bookstore [in Gwanghwamun] have begun making places for people to read in a relaxing environment (a large-sized table and chairs are provided under ambient lighting), that’s not enough. Until the government resolves social issues like fierce competition for university entrance and long working hours, I believe Korea won’t see much differences in terms of people’s reading habits.”