Cardless transactions on the rise

Cardless transactions on the rise 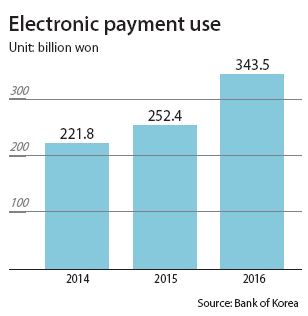 After a Sunday night dinner with friends, Lee Jung-min, a 27-year-old Seoulite, whipped out his smartphone and paid for his portion of the meal using a money transfer app called Liiv. His friend received a message on the chat app KakaoTalk notifying him of the payment, and all Lee’s friend had to do was click on the message to transfer the money to his bank account.

The way Lee and his friends split their bill is emblematic of how Koreans are increasingly relying on electronic payment services like Liiv to conduct transactions. Aside from money transfers between individuals, more Koreans are using such payment services to purchase goods online, with the average amount of transactions per day reaching over 340 billion won ($303 million) in 2016, according to the Bank of Korea.

“With online shopping becoming a common part of life, the amount of transactions made through payment gateway services and escrow rose 36.7 percent and 23.5 percent each to 245.0 billion won and 56.3 billion won,” the central bank said in a report.

Payment gateway service providers facilitate transactions between buyers and sellers immediately, as opposed to escrow, where the service provider receives money from a buyer and sends money to the seller only after confirming the product or services were rendered.

On the other hand, transactions through electronic debit payment instruments fell over 90 percent last year compared to 2015. Electronic debit payment instruments provide services through which buyers can wire money from a registered account to the account of the seller. Transactions through this service tanked to 3.5 million won in 2016. The Bank of Korea said consumers turned to more convenient means of transactions like the Kakao Pay and Payco apps.