Dongkuk mills steel of its own

Dongkuk mills steel of its own 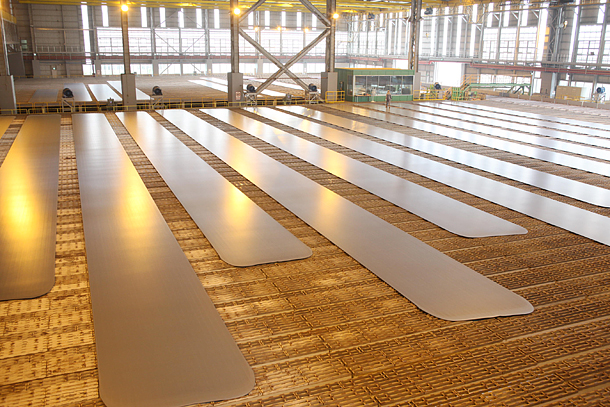 Steel plates made from slabs lie on a cooling bed inside Dongkuk Steel’s Dangjin factory in South Chungcheong. [DONGKUK STEEL]

DANGJIN, South Chungcheong - In this serene rural city about 50 miles south of Seoul, a steel mill was busy churning out ingots Wednesday morning.

The factory belongs to Dongkuk Steel, which was manufacturing its first batch of steel plates made from slabs imported from the CSP Steel Plant Complex, a factory in Brazil that it partially owns. With the CSP plant, Dongkuk Steel became an integrated steel company with full capacity to process iron ore into steel plates.

“Operating a manufacturing facility in Brazil alongside other companies is a difficult task, but we’re doing it with the mind-set that we’re the ‘first penguin’ who jumps into dangerous waters before anyone else,” said the company’s vice chairman and CEO, Chang Sae-wook, during a ceremony to celebrate the slabs’ arrival to Korea on Wednesday.

“Dongkuk’s role in the CSP project was crucial,” said Eduardo Parente, CEO of CSP. “It resolved many barriers even before other partners joined for the plant.” 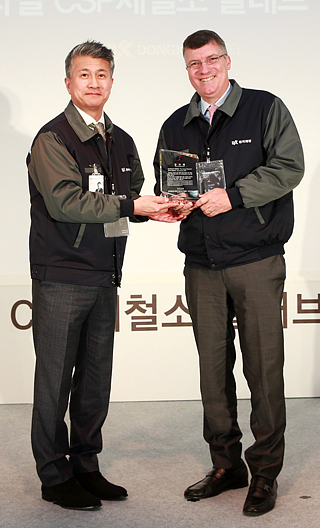 After traveling more than 12,000 miles for 50 days from Ceara, Brazil, the CSP plant’s slabs first landed on Dangjin’s shore on Saturday.

On Wednesday morning, Dongkuk’s steel plate factory began processing the rough slabs into steel plates. The facility was abuzz with activity as machines molded the material into ingots, with the size, thickness and color changing as the slabs passed from one part of the production line to another.

Built in 2010, Dongkuk’s steel plate factory is able to annually produce 1.5 million tons of steel, enough to build 107 container ships. The high-strength material can only be manufactured in blast furnaces with temperatures hot enough to melt iron ore into iron mold and then cast into slabs. Steel companies then take the slabs into mills and process them according to the size and thickness appropriate for their use such as in shipbuilding, oil pipes and construction.

Although it is a crucial tool for steelmakers, not many own blast furnaces since the facility requires large investment, technology and know-how. Importing slabs, though, means an unstable supply and high cost.

The blast furnace was a core task for 63-year-old Dongkuk Steel, which didn’t have one despite being one of the oldest steelmakers in Korea. There were about five failed attempts in the past, starting from Chang’s father to his older brother, Chairman Chang Sae-joo, who is currently serving a term in prison for illegal gambling overseas and embezzlement.

But it was actually Chairman Chang who first opened relations with Brazil for the CSP project, signing a partnership in 2005 with the regional office of Ceara. The company ran into many obstacles after that. Some original partners left due to market situations, the steel market collapsed after the global financial crisis in 2008 and Chairman Chang ran into his gambling troubles.

The construction, which required an investment of $5.5 billion, finally started in 2012 and took four years to complete. The plant saw its first slab outcome last June and facility pulled up its productivity fast, producing 1.4 million tons of slabs as of February. Dongkuk plans to bring in a total of 250,000 to 300,000 tons of slabs in its Dangjin factory this year and expand the number to 600,000 tons by 2018.