Finding a voice through subtitles : Gang Min-ha translates many of Korea’s most beloved Japanese films

Finding a voice through subtitles : Gang Min-ha translates many of Korea’s most beloved Japanese films 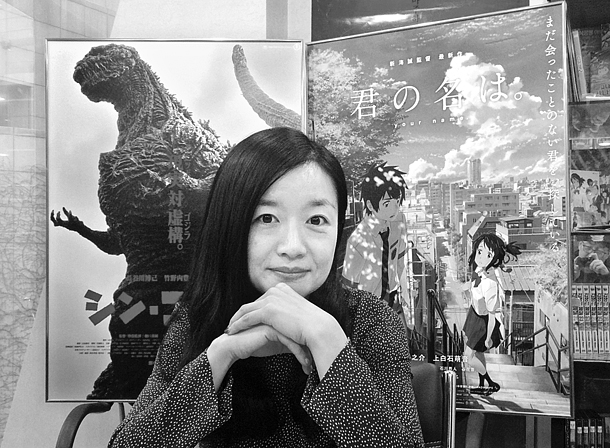 Many Koreans fell in love with Japanese films and their unique sentiment in the late 1990s through the hit “Love Letter” (1995).

From “Love Letter” to “Your Name” (2016), which was a major success in Korea, Gang Min-ha has been the one translating Japanese films and writing their Korean subtitles. Over the years, she has translated about 200 Japanese films. They include the films of some of the most renowned Japanese directors like Shunji Iwai, Takeshi Kitano, Hirokazu Koreeda, Hayao Miyazaki and Mamoru Hosoda. Many of these directors are known to specifically request that Gang translate their works.

Talking to the JoongAng Ibo in her office recently, Gang said that to respond to fans’ requests, the dubbed version of “Your Name” will open in Korean theaters this summer, adding that she will be working on the script.

The Japanese animated film, written and directed by Makato Shinkai, revolves around a high school girl in rural Japan, Mitsuha, and a high school boy in Tokyo, Taki, who swap bodies.

When Taki, with Mitsuha in his body, speaks in feminine ways and in a dialect, people around him are baffled.

This, of course, offered a challenge for translation.

In Japanese, there is a distinction in referring to oneself depending on gender, but there isn’t a similar distinction in Korean. So Gang, instead, chose popular slang to make Taki sound feminine. “It required creativity,” she said. “If there is a scene where the Japanese audience laughs, but the Korean audience doesn’t find it funny, it means it’s not well translated.”

Gang, who wanted to be a writer, studied Japanese while she was majoring in journalism at Ewha Womans University. In 1997, she went to Japan as an exchange student. It was there she worked as a Japan correspondent for a film magazine based in Korea and fell in love with movies. Since then, she has worked as a translator for various projects in the film industry, which led her to become a professional in film translation.

“Translating films through subtitles is similar to writing, so my dreams became true in a way,” she said.

As for the film that stuck with her the longest, she chose “Love Letter.” The most famous line from the film is “o genki desu ka,” which means “how are you?” Gang translated it as “are you doing well?” It’s been said that Iwai remarked that Gang best understands his language and ever since, Iwai requested that his novel also be translated by Gang.

But she added that “Summer of Kikujiro” (1999) is another favorite of the films that she has worked on. She says it is because the film, through the journey of a boy looking for his mother, portrays a human’s loneliness, courage and growth.

Currently, Gang is working as a producer of the upcoming animated film “You Are Umasou,” which is based on a Japanese picture book series. She is also working on the Japanese script for “The Battleship Island,” a historical film set during the 1910-45 Japanese colonization of Korea.

“No matter how advanced translation programs or AI get,” she said, “translating literature with the full knowledge of cultural differences is a domain only for humans.”