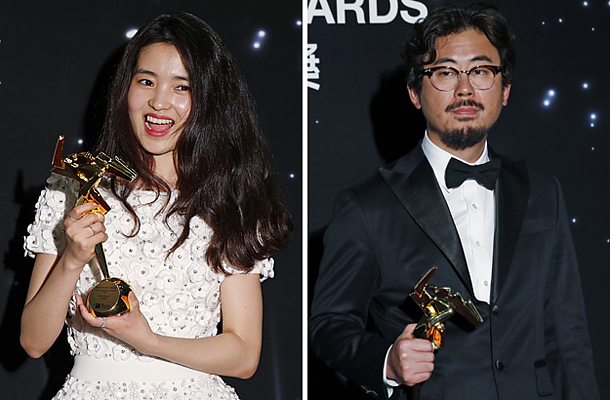 Actress Kim Tae-ri, left, was named best newcomer for her role in “The Handmaiden” and auteur Na Hong-jin was honored the best director for “The Wailing” at the 11th Asian Film Awards (AFA) held in Hong Kong on Tuesday. [AP/YONHAP]

Director Park Chan-wook’s “The Handmaiden” (2016) was the big winner at the 11th Asian Film Awards (AFA) held in Hong Kong on Tuesday, taking home four awards out of six nominations.

The thriller, which competed for the Palme d’Or at Cannes last year and is based on Sarah Waters’ novel “Fingersmith,” took home the awards for best newcomer for Kim Tae-ri, supporting actress for Moon So-ri, best production design and best costume design.

“I’m well aware that [this award] is all thanks to those people who made the film behind the camera,” said Kim after receiving the award. “I will put utmost efforts to become a refreshing and unconstrained actress in my future work.”

“The Handmaiden” follows a money-hungry pickpocket (Kim Tae-ri) who is tasked with luring Lady Hideko (Kim Min-hee) into marrying Count Fujiwara (Ha Jung-woo) in return for a share of Hideko’s future inherited fortune.

Also recognized was filmmaker Na Hong-jin, who received best director for his supernatural thriller “The Wailing.”

He beat competitors from China, Hong Kong and Japan, including Feng Xiaogang of “I Am Not Madame Bovary,” Derek Tsang of “SoulMate” and Koji Fukada of “Harmonium.”

Starring Kwak Do-won, Chun Woo-hee and Hwang Jung-min, “The Wailing,” whose Korean title is “Goksung,” tells the story of a tranquil rural village where a string of mysterious serial murders occur after the arrival of a stranger.

Five South Korean films, including “The Wailing” and “The Age of Shadows,” were nominated for best film but failed to win.

The top honor went to the Chinese film “I Am Not Madame Bovary,” while its actress Fan Bingbing picked up the best actress award.