Feud over going negative heightens between An and Moon

Feud over going negative heightens between An and Moon 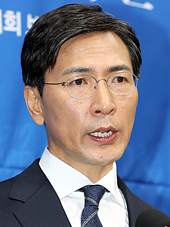 The feud between Democratic presidential frontrunner Moon Jae-in and the second most popular candidate, An Hee-jung, the governor of South Chungcheong, heightened Wednesday after An lashed out at Moon and his aides for negative campaigning. In a Facebook post, uploaded around midnight, the 52-year-old governor, who has been trying to catch up with Moon with only four days left before the primary election on Monday, harshly repudiated his rival, saying Moon’s negative tactics would “make people frightened and disenchanted.”

“If the purpose of his campaign is to make people disenchanted, it has so far succeeded,” snapped the two-term governor. 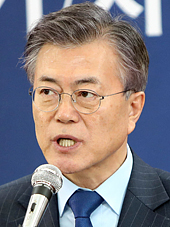 An also said if Moon carries such an attitude into governance as president, he will not be able to lead the country successfully.

The governor’s remark is a culmination of weeks-long back and forth remarks between the two candidates, as the DP’s primary election approaches with an early presidential election scheduled for May 9. Whoever wins the DP nomination will have little challenge from other candidates as there is growing public sentiment that the first transfer of power from conservatives to liberals in a decade is necessary.

An’s criticism of Moon came after weeks of pulling no punches at each other in the course of the campaign. The latest sign of discontent and rising tensions between the two was seen during a televised debate aired on Tuesday. Facing An, Moon proposed to stop all negative campaigning as they all belong to the same party, with the shared purpose of achieving a change of power.

An agreed with Moon but was quick to point out that it was those in the Moon campaign resorting to negative campaigning. Moon did not let An’s comment go by, advising An to distance himself those around him telling him to go negative.

Open discontent between the two came as Moon found himself under scrutiny earlier this week for his remark made during another televised debate on Sunday, in which he noted that he was once commended by then-brigade commander Chun Doo Hwan, who would later become the military head of state, was quickly seized by An’s campaign and criticized. Former lawmaker Park Soo-hyun, the An campaign spokesman, derided Moon for being proud of an award given by the former dictator.

Moon said such criticism against him was an affront to his dignity, especially given his track record of dedication to democracy and improving human rights as a former human rights lawyer dating back to the 1970s.

Open disagreement between the two most popular candidates first emerged when An stated he was open to forming a coalition governing body with all political parties, even the Liberty Korea Party that supported the ousted Park Geun-hye, if they were willing to embrace dramatic reforms. Moon criticized An’s position, saying a full apology and self-reflection by the former governing party should come before raising the idea of a coalition.

Open conflict continued when the governor said he believed former President Park Geun-hye “had good intentions” in setting up two foundations that were allegedly used by her friend, Choi Soon-sil, to extort money from conglomerates in return for favors. Moon pointed out An’s remark “lacked anger” for the injustice of it. An later apologized for his remark.

Meanwhile, the DP on Tuesday closed its second round of voter registration for participants in its primary race.