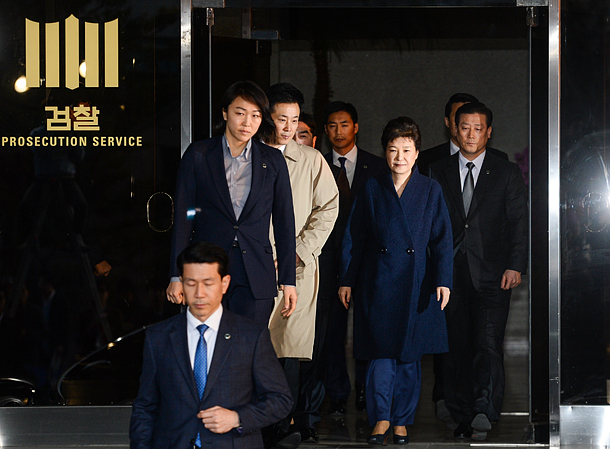 After 22 hours of questioning in the Seoul Central District Prosecutors’ Office, former President Park Geun-hye heads back to her house Wednesday morning. [YONHAP]

The prosecution completed Wednesday a nearly 22-hour questioning of former President Park Geun-hye about her abuse of power and corruption allegations and began reviewing whether to detain the country’s first leader to be ousted by impeachment.

Park left the prosecution at around 6:55 a.m. and returned home in southern Seoul. She is facing 13 charges, including receiving bribes from conglomerates in collusion with her longtime friend, Choi Soon-sil, and leaking secret information to Choi.

The Constitutional Court removed Park from office on March 10, lifting the presidential immunity that has shielded her from criminal prosecution. According to prosecutors and Park’s lawyers, the interrogation took about 14 hours. During the other seven hours, Park reviewed the prosecution’s report and demanded some changes.

“Because the report was long, we had many things to check,” said Yoo Yeong-ha, one of Park’s lawyers. “It took a while to meticulously check the report.” Yoo and another lawyer, Chung Jang-hyun, accompanied Park throughout the process.

Park reportedly demanded some changes, arguing that statements were recorded differently from her intentions. A prosecution source said Wednesday her demands were reflected. Obtaining her concession is key for the statement to have evidentiary power later in a trial.

Senior prosecutors Han Woong-jae and Lee One-seok questioned her. Evidence presented by the prosecution during questioning was also attached to the report. According to sources, Park aggressively denied all charges against her during the investigation.

Park arrived at her residence in Samseong-dong, southern Seoul, at around 7:06 a.m. and was received by Reps. Choi Kyung-hwan and Yoon Sang-hyun. The wife of Rep. Suh Chung-won also came to greet her. Dozens of supporters also spent the night to wait for Park’s return.

Park was the fourth former president to be questioned by prosecutors, and her questioning was the longest of the four. After the questioning, Park’s lawyers expressed satisfaction.

“Incorrect information with malicious intentions, sensational reports and provocative exaggerations have now disappeared, and the truth began to reveal itself,” Sohn Beom-kyu, one of Park’s lawyers, told the press. “We express respect to the prosecutors and other members of the prosecution who made effort to lay the truth bare.”

Sohn later said the prosecution appeared to be objective and neutral, as opposed to the independent counsel.

It was a drastic change from Park’s earlier fury toward the prosecution, when it named her as a co-conspirator in the massive corruption and abuse of power scandal after an initial probe in November. After the prosecutors named Park as a criminal suspect, she made it clear she would not cooperate. At the time, her lawyer, Yoo, said the charges were “a house of cards.”

Independent counsel Park Young-soo later continued the probe, but Park also called the investigation “politically biased” and refused to cooperate. The team added allegations of bribery and handed over unfinished cases to the prosecution earlier this month.

The independent counsel probe prompted a bribery investigation involving Park, Choi and the country’s largest conglomerates. It indicted Samsung leader Lee Jae-yong on charges of offering 43.3 billion won ($38.6 million) of bribe to Park through Choi, and the prosecutors are now looking into other companies including SK and Lotte. Depending on the conclusion of the probe, the total amount of bribes Park allegedly took could reach 100 billion won.

A senior prosecution source said Wednesday that the questioning went smoothly. “There was no question we could not ask due to time constraints,” he said. “We are currently conducting a thorough review and a decision is yet to be made on whether we will seek to detain her or not.”

Prosecutor-general Kim Soo-nam will ultimately make the decision on whether to seek a court warrant to detain Park after receiving a briefing by the investigators. Kim was appointed by Park in December 2015. Insiders of the legal community said there is more than enough reason for the prosecution to seek a warrant to detain Park, suggesting that the decision will be more political than anything else. Others involved in the scandal, including Choi and Lee, were all detained during their investigations.

The presidential election is scheduled for May 9 and campaigns have begun. Park’s detention could be a political game-changer, as her supporters - mostly conservative, older adults - are increasingly united. According to the political calendar, candidates for political parties will be finalized early next week; the candidate registration will take place from April 14 to 16.

Speculations are high that Kim will not likely take a long time to make a decision because of an unfortunate precedent that the prosecution suffered. In 2009, the prosecution spent three weeks to decide whether to seek a detention warrant against former President Roh Moo-hyun after questioning him about a bribery scandal. During the delayed process, Roh committed suicide, prompting criticism of the prosecution’s handling of the case.