After two years, Sewol ferry is successfully lifted off the ocean floor

After two years, Sewol ferry is successfully lifted off the ocean floor 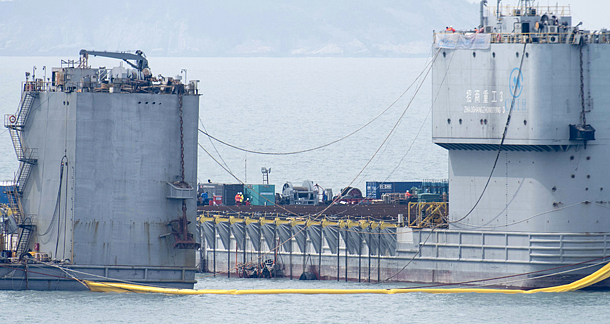 Two salvage barges test the possibility of lifting the sunken Sewol ferry off Jindo, an island in South Jeolla, on Wednesday during favorable weather conditions. [YONHAP]

After about five hours of salvaging the Sewol ferry, which sank on April 16, 2014, killing 304, the ferry was lifted 1 meter (3.2 feet) from the seabed on Wednesday.

“The Sewol was lifted about 1 meter from the seabed,” said Lee Cheol-jo, head of the Sewol salvaging committee of the Ministry of Oceans and Fisheries in a press conference hosted in the Jindo District Office in South Jeolla at 5:30 p.m. “We didn’t experience any trouble in lifting the ferry in a test to see if the ferry can be lifted, at all, and will continue the process late into the night if we can get the ferry, which is slightly tilted to one side, rightly balanced, and if the weather conditions remain good.”

The 6,825-ton ferry capsized off Jin Island in 2014. It was carrying 476 people, 304 of whom, mostly high school students on a field trip, died. Nine bodies are still unaccounted for and are believed to be inside the ship.

The salvage operation, led by the Oceans Ministry with Shanghai Salvage, a state-run Chinese company, is using a method known as “tandem lifting” to raise the ferry. Two large jacking barges are pulling wires connected to 33 beams that were inserted under the Sewol when it was lying on its port side, 44 meters (144 feet) below surface.

In the case that the missing nine bodies are in the ferry, a net that is 200-meter wide, 160-meter long and 3-meter high is to be cast around the ferry to make sure they are not lost in the lifting process. The Oceans Ministry also said it will be dispatching divers to the sea to search for bodies after the ferry is completely lifted.

“We decided at 8 a.m. to perform a test lift after confirming that weather conditions were good,” Lee said. “From 10 a.m., we slowly tested the tension of the wire in phases, and around 12:30 p.m., started lifting the ferry. It was around 3:30 p.m. that the ferry was lifted about 1 meter.

“The reason why this testing process took longer than we had expected [which was two to three hours] was because the initial lifting of the ferry from the seabed is the most delicate process in this whole salvaging procedure,” he added.

Once the Sewol rises 13 meters above the surface of the water, it is to be placed on a semi-submersible ship, to be taken to Mokpo, South Jeolla, about 87 kilometers (54 miles) away from the salvaging site, with the ferry completely above the water surface while it travels on the ship.

The investigation into possible causes of the capsizing and into the body of the ship to search for the nine bodies will commence once the ferry reaches the port in Mokpo.

The government chose Wednesday morning as the day to attempt the salvaging, because the lifting requires a period of three days with waves less than 1.5 meters in height. The March neap tide, when the difference between high and low tides is at a minimum, ends on Friday.

Relatives of the nine missing victims have been waiting 1,072 days since the ferry sank.

“Please pray for the salvaging of the Sewol ferry,” seven relatives of the nine said in a statement they read out loud at Paengmok Harbor of Jin Island on Wednesday morning. “Please help us find our family, who has not returned to us from the cold water of the sea for three years.”

They watched the salvaging process, some 3 kilometers away, on a vessel provided by the government.