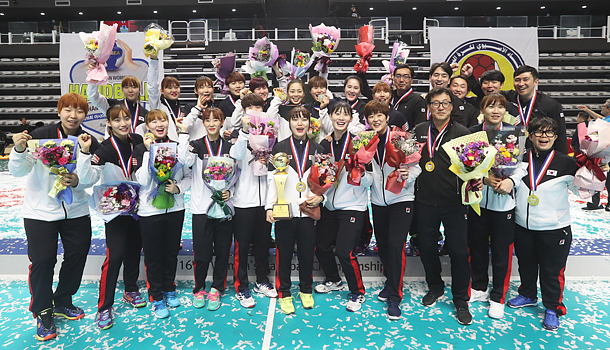 After a disappointing result at the Rio Olympics, finishing 10th, the Korean women’s handball team made a successful comeback by winning the Asian Women’s Handball Championships at Chilbo Gymnasium in Suwon on Wednesday.

The team, led by manager Kang Jae-won, was declared a champion by winning against Japan 30-20. The Asian Women’s Handball Championships is held once every two years and the Korean handball team won its third consecutive championship, having previously won in 2012 and 2015.

Of the 16 Asian Championships, the Korean team won 13 of them and once again proved its dominance in Asia.

The team got off to a late start, down 15-11 after the first half and struggling to score goals, but then Kim Jin-yi, Ryu Eun-hee and Kwon Han-na scored a series of goals and the team squared the game 16-16, ten minutes into the second half.

With Kim’s and Sim Hae-in’s additional attacks, the Korean team took the lead for the first time, 25-17. As Ju Hui, goalkeeper, blocked off the Japanese team’s attacks in the second half, they were able to win its final game against Japan.

During the final game, Kim was the MVP, leading the team with seven goals while Ryu scored five goals.

In the bronze medalist game earlier in the day, China beat Kazakhstan 34-26 to finish third in the Championship.

Korea, Japan and China finished as the top three in the Asian Championship and the three countries qualified to compete at the 2017 International Handball Federation World Women’s Handball Championship in Germany, which is scheduled to run from December 1 to 17.

“Competing at the World Championship was our ultimate goal,” Kang said. “At our level right now, advancing to the round of 16 will be difficult. We’ll bring in a foreign coach and try our hardest to advance to the round of 16, or maybe to the quarterfinals.”

Currently, 12 teams have finalized their spots in the World Championships and the remaining 12 countries will be decided through European Qualification and the 2017 Pan American Women’s Handball Championships.