DSME gets another bailout of 2.9 trillion won

DSME gets another bailout of 2.9 trillion won 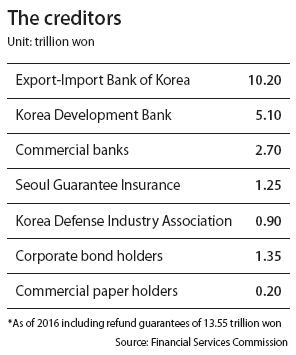 The country’s state-run banks and top financial regulatory agency announced another round of bailouts for Daewoo Shipbuilding & Marine Engineering on Thursday to prevent the financial collapse of one of Korea’s largest shipbuilders with a fresh cash injection of 2.9 trillion won ($2.6 billion).

The latest move follows an earlier bailout of 4.2 trillion won provided in 2015 and underscores the worse-than-expected state of DSME. Financial authorities initially thought the previous aid would be enough to turn around the indebted shipbuilder.

“I offer my sincerest apology for going back on our word that we would not pour any more taxpayer money on DSME,” said Yim Jong-yong, chairman of the Financial Services Commission, the regulatory agency. “However, the fall of DSME could incur a loss of as much as 59 trillion won on our national economy, and we have come to the conclusion that the 4.2 trillion won we provided in October 2015 is not enough to save the company.” 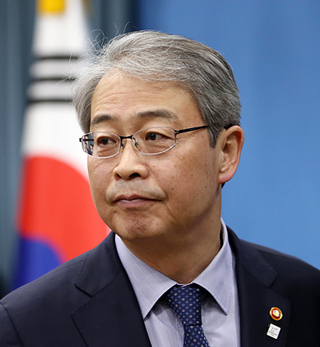 Yim Jong-yong, chairman of the Financial Services Commission, at a government meeting on Thursday in Seoul to discuss Korea’s industrial competitiveness. [YONHAP]

If banks and lenders fail to reach an agreement on the latest plan, the Financial Services Commission said DSME will enter what it calls a prepackaged plan, a type of court receivership that could lead to liquidation.

The regulatory agency announced a set of new rescue measures including fund provision, debt-equity swaps and rollover of corporate bonds and other debt instruments. The maneuvers are intended to address DSME’s liquidity shortage estimated at between 3 and 5.1 trillion won by the first half of 2018, the regulator said.

Two state-run banks - Korea Development Bank (KDB) and Export-Import Bank of Korea (Korea Eximbank) - will take the lead by each providing half of the 2.9 trillion won. Other commercial banks that provided loans to the company will not contribute more money but have been asked to extend the maturity on their bonds and swap debt for equity, a departure from the previous plan.

“Considering the urgency of the situation, it isn’t possible for KDB and Korea Eximbank to carry the torch alone,” said Lee Dong-geol, chairman of KDB. “Without any special arrangement, DSME will not be able to pay off the debt by the end of April and go insolvent. We need the agreement of local banks and creditors” to extend maturity and swap debt.

All 1.6 trillion won in unsecured corporate bonds from KDB and Korea Eximbank held by DSME will undergo a debt-equity swap. 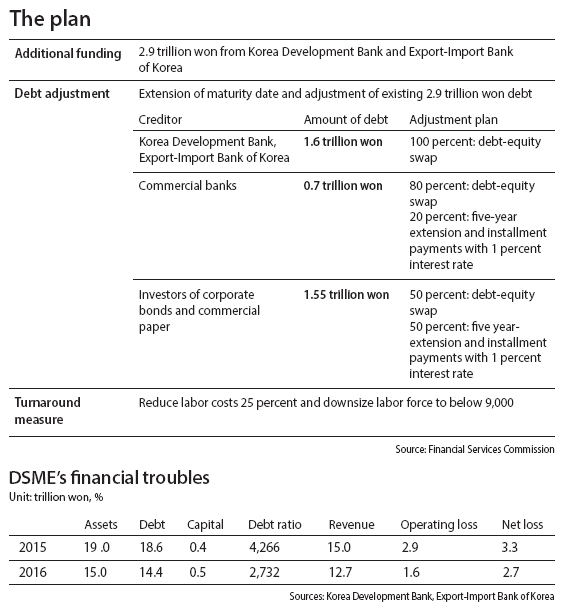 Separately, DSME had borrowed 700 billion won from local banks including KB Kookmin, Woori and KEB Hana. Under the swap proposal, 80 percent of that will be turn into equity, while payment of the remaining 20 percent will be delayed for five years.

Another set of corporate bonds and commercial papers amounting to 1.55 trillion won will have 50 percent exchanged for equity, and payment on the other half will be postponed.

The crucial point now is whether holders of the debt and other lenders are willing to extend the payment deadline. Issuers of the corporate bonds due to mature on April 21 will meet on either April 14 or 18 to discuss the issue.

Of the entire 1.35 trillion won in corporate bonds, the majority of them are from pension funds like the National Pension Service and Korea Post. But with the National Pension Service embroiled in the influence-peddling scandal that brought down President Park Geun-hye, the institution is reluctant to be seen as siding with a large conglomerate with ties to the government.

Besides the challenge of selling the plan to bond holders, the Financial Services Commission will face a growing chorus of critics worried that financial authorities are recklessly using taxpayer money to fund a company that has been accused of auditing fraud and embezzlement.

The 4.2 trillion won funds were decided on the assumption that the troubled shipbuilder would achieve annual orders of $11.5 billion, but DSME’s actual performance in 2016 stood at a mere $1.5 billion, according to the financial regulator.

The Financial Services Commission, however, explained that 2016 was “an unusually tough year for the shipbuilding industry” and pointed to the potential dangers of DSME’s collapse. The agency said total loss in the domestic economy would amount to 59 trillion won, an estimate that some critics say is exaggerated.

Yim said that approximately 50,000 people will lose their jobs as a consequence of DSME’s financial obligations, and lenders will have to foot around 13.5 trillion won in refund advance payments for purchasers of DSME’s ships. The lenders had undertaken a refund guarantee to provide protection for buyers that signed contracts with DSME in case the company went under.

“The issue comes down to the refund guarantee,” said Kim Yong-hwan, a professor of naval architecture and ocean engineering at Seoul National University. “The bottom line is we cannot afford to close down the company and force banks to pay the substantial amount as a refund.”

Ahead of the announcement, the possibility of DSME heading into a debt workout program or court receivership was raised, but the Financial Services Commission said that such options were not ideal.

Yim said that if a shipbuilder goes into court receivership, then purchasers of ships can cancel their contracts with the shipyard citing “builder’s default” as an excuse. Right now, DSME has an order backlog of 114 ships, of which 96 contracts have a clause that buyers can nullify the contract in case of builder’s default. If DSME goes under, then 32 trillion won that has already gone to building vessels will go to waste, not to mention the refund guarantee worth 13.5 trillion won that banks will be forced to cough up.

The last-resort measure, dubbed a prepackaged plan, is a mixture of debt workout and court receivership aimed at allowing creditors to issue a preliminary restructuring plan earlier to the bankruptcy court so that the insolvent company and creditors can enter negotiations earlier than before.