It is fortunate that the prosecution’s questioning of former President Park Geun-hye went smoothly on Tuesday. There was little noise over how she was treated. Park actively denied and refuted the charges against her, either claiming that she did not make any of the orders or that charges were not true.

But the prosecution is not leaving empty-handed as it achieved its purpose of collecting a pro forma report from Park to supplement its material evidence and other testimonies. Now that Park has responded to the prosecution’s request, it is time to decide whether she should be arrested. The prosecution will make a decision based on the “sincerity” of her testimony. 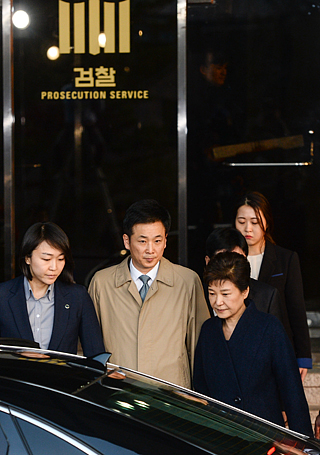 It is up to the prosecutor general, Kim Soo-nam, to seek a court warrant to detain Park. There are mixed views. Many believe detaining her is inevitable as Park is at the heart of a bribery and collusion case and her charges are evident. It is only fair.

However, Kim should also listen to the argument that emphasizes investigation without detention and presumption of innocence in criminal law. Kim needs to calculate actual benefits that can be gained from detention when there is little concern for destruction of evidence or flight.

He should also consider if public sentiment demands the secondary punishment of detention for an impeached president whose political career is already doomed. Park could be indicted without detention, and it won’t be too late if she is punished when the Supreme Court finds her guilty.

The prosecution will be prudent but won’t delay its decision. The prosecution should not be what one politician has called “grass that bends even before the wind blows.” It will be undesirable for the prosecution to be pushed by public opinion and seek a warrant to hand over the decision and responsibility to the court. It should not be swayed by politics or pressures of protesters.

Kim needs to make a decision based on laws and principles. That is how the prosecution will recover its authority and the public’s confidence.