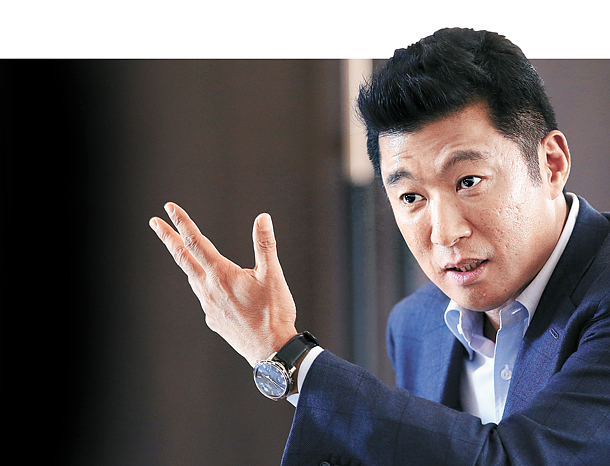 The multipurpose entertainment complex was built with some 1.3 trillion won ($1.15 billion) in investments and is integrated with a hotel, convention centers, a casino and shopping areas.

“This will be the first integrated resort in Northeast Asia and I will change the paradigm of local tourism industry through it,” said Chun Phillip, chairman of Paradise Company, which owns several casinos in Korea.

It takes about 5 minutes from Incheon airport via train and 15 minutes on foot. It will be built on 330,000 square meters (3.52 million square feet) of land, which is equivalent to about 46 soccer fields. There will be two basement floors and 10 floors. The six-star resort will have 711 hotel rooms, the biggest casino for foreigners in the country and a convention center that can hold up to 1,600. The company plans its first opening ceremony for April 20. Paradise City will open the gym, spa and other shopping plazas later in the first half of this year.

Chun has been working from his office in Yeongjong Island, Incheon, since mid-February instead of heading to his headquarters in Jung District, in central Seoul. He stays at Paradise City about five or six hours to make sure things are on track. Last Thursday, he reserved a one-night stay at its hotel through his smartphone.

The business is one of the biggest projects for the company. Chun’s also concerned because the drop in the number of groups of Chinese tours due to the Chinese government’s apparent retaliations against Korea’s decision to deploy U.S. missile defense system here. The casino business is also very competitive in Asia. Many Asian countries like Japan, Macao, the Philippines and Vietnam are expanding their investments in casinos.

“I can’t deny that I am facing big pressure,” said Chun. “But Paradise City will not only improve the competitiveness of local tourism industry but also the competitiveness of Paradise itself. For the past 45 years, Paradise has been doing businesses related to hotel, casino and other leisure activities, and this time it will have the company change from a small store in some neighborhood to a mall.”

Even though the Japanese government is trying to ease its regulations on casino, it will take another five years or so for them to open multipurpose resorts like Paradise.

Chun said the location of Paradise City is unique as well.

“The resort is close to major cities in Northeastern Asia and the Seoul Metropolitan Area, so both foreign tourists and local people can easily visit the place,” said Chun. He also pointed out that the hallyu-themed concept of the resort will be one of the key factors that will attract more tourists.

Chun got his ideas for the key concept of the resort during a meeting with Caesars Entertainment CEO Gary Loveman.

Chun said Loveman told him that there is nothing to be worried about since there is a special theme called hallyu in Korea.

Chun said hallyu now is in its fifth generation. The first generation was drama, the second one was K-Pop, the third was movies and beauty products and the fifth one centers on the Korean lifestyle, according to Chun. The fifth generation means people from around the world, both from Western and Eastern countries, enjoy Korean style through a mix of cultures.

There are many artistic factors to the resort as well, since Chun partnered with well-known artists and architects like Alessandro Mendini, Atelier Mendini CEO, and English artist Damien Hirst.

“There will be many tourists coming from abroad to the resort near the opening ceremony planned next month,” said Chun. “We will have to see how it works out for the next three to four months to see how Paradise City will perform later on.”

Phil-lip is a son of Chun Rak-won, a legend in the nation’s casino and hotel industry and the founder of Paradise. Phil-lip entered the company in 1992 and was appointed chairman in 2005. He took over the resort project in 2011.

Phil-lip’s Kakaotalk profile says “Destination Creator.” He wants to create a resort where all foreign and local tourists want to come. He is also planning a second and third Paradise City but his first test begins next month.