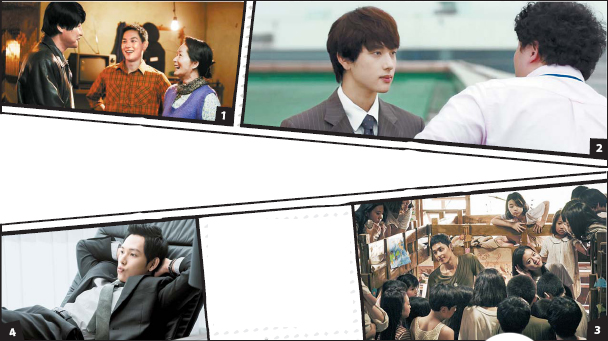 Actor Yim Si-wan switches up his warm-hearted and honest image in his new movie “One-Line,” where he plays a sly swindler (picture 4). Throughout his acting career, he has mostly played a ‘nice guy’ character, as seen in 1. “The Attorney” (2013), 2. the tvN series “Misaeng” (2014) and 3. “A Melody to Remember” (2016). [NEXT ENTERTAINMENT WORLD, SCREEN CAPTURE]

A warm-hearted and honest man with innocent, boy-next-door looks is the image commonly portrayed by singer-actor Yim Si-wan. That image, however, will soon be changed once audiences head to cinemas to see the upcoming crime movie “One-Line” that features Yim playing a sly swindler.

Though the 28-year-old, who also is a member of K-pop boy group ZE:A, has entertained fans by singing and dancing on stage, he has mostly melted hearts playing endearing roles on screen.

In the award-winning tvN series “Misaeng” (2014) that shot him to stardom, for example, the actor played a newly-employed worker struggling to adjust to office life. Earnestly overcoming the obstacles set in front of him won sympathy from viewers, especially from office workers who could empathize with his character’s situation.

In war drama “A Melody to Remember” (2016), Yim’s role as a heart-broken yet virtuous soldier who protects and heals the mental wounds of children from an orphanage by forming a choir made a strong impact with audiences. His role in “The Attorney” (2013), where his character suffers abuse under an authoritarian government, is another movie that contributed in building up Yim’s image as a nice, innocent man. 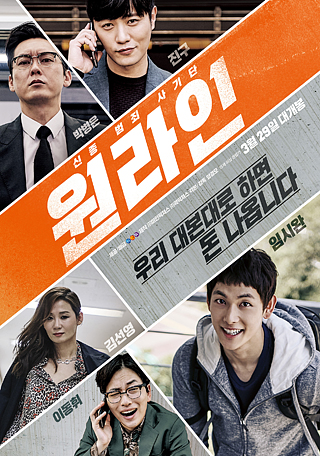 “One-Line” is a new crime film slated for release on Wednesday. [NEXT ENTERTAINMENT WORLD]

The image that Yim has built up, however, is likely to collapse with “One-Line.” A term that refers to mortgage fraud, the upcoming crime flick, directed by Yang Gyeong-mo of award-winning short film “White Pig” (2012), revolves around a group of swindlers who make a living out of collecting commissions from people who could not get loans from banks by providing them with fake identities. It is set in 2005 when mortgage fraud was a serious social issue in Korea, and co-stars Jin Goo, Park Byung-eun, Kim Sun-young and Lee Dong-hwi.

Yim plays a poor university student and born swindler named Min-jae, who joins the con men to make a quick buck. Though the character looks sweet on the outside, like the characters in Yim’s previous work, his innocent-looking face is merely used as a mask to cheat others into believing in his words.

“[Min-jae] is definitely a role that is quite different from the characters I have played in the past,” said Yim during a press preview held in Gwangjin District, eastern Seoul, earlier this week.

“I was able to learn the attractions of a new kind of character, and I would be very grateful if I can convince audiences that I can pull off this type of role.”

Yim added, “Perhaps because I have mostly played nice roles, a lot of people told me that I actually seem nice, [which kind of pressured me]. While shooting ‘One-Line,’ I felt a sense of liberation for not having to try to seem nicer than I actually am.”

Aiming to bring out a different side of Yim is also what drove the filmmaker to cast the actor. The director explained during press preview that one of the standards that he took into consideration before casting actors was whether they were willing and able to show different sides of themselves that they had not shown in previous roles.

“I called [Yim] hoping to meet him as soon as I watched the first episode of ‘Misaeng.’ I saw potential in him as an actor. After meeting up and talking with him, I realized that he is stronger and sharper than how he had been depicted in previous works. But he was very soft and delicate at the same time,” the director explained.

The actor’s challenge to expand his roles is going to continue with a new series and movie slated to be released this year.

In the upcoming movie “The Merciless,” Yim plays a strong-hearted newbie prisoner alongside his co-star Seol Kyung-gu who plays the most-feared prisoner about to be discharged. The film completed shooting in December but its release date is yet to be announced.

In the upcoming MBC historical drama series tentatively titled “The King Loves,” Yim plays a crown prince competing for the love of the beautiful daughter of the wealthiest man in the Goryeo Dynasty (918-1392).