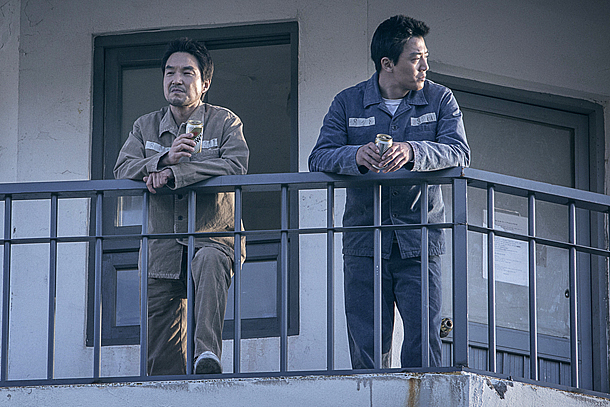 “The Prison” is an action-packed crime film that stars actors Han Suk-kyu, left, and Kim Rae-won as prisoners who can freely come in and out of the prison. [SHOWBOX]

Prison films often follow a quick-witted criminal making meticulous attempts to escape from jail, as seen in “A Violent Prosecutor” (2016) and the American drama series “Prison Break” (2005-9). But the crime movie “The Prison” diverges from that pattern and makes a refreshing attempt to extend the genre.

Instead of depicting prison as a suffocating place for criminals, the flick features it as a home where criminals can freely walk in and out.

Filmmaker and writer Na Hyeon, who is better known as a scriptwriter for writing “May 15” (2007) and “Forever the Moment” (2008), tried to make his first movie in the director’s chair “not too obvious” by depicting a refreshing story against the backdrop of a seemingly common setting.

Starring actors Han Suk-kyu and Kim Rae-won, the film unfolds as former policeman Yu-geon (Kim), who was once recognized for his abilities to capture criminals, is imprisoned after getting arrested for a number of charges. Due to his brute personality and violence, he moves from one prison to another across the nation until he finally arrives at the very prison where Ik-ho, who is called the “absolute king” of the crime world, is confined. After seeing the prison guards’ obedience towards Ik-ho and the special treatments he gets, like being able to freely come in and out of prison to commit grave crimes outside, Yu-geon decides to stick with Ik-ho.

Although it is not clear in the film, the movie is set in the mid-‘90s to reflect the director’s intention to depict the lack of social order in society at the time.

Prisoners freely going out and voluntarily coming back into prison is an interesting idea that seems likely to intrigue audiences, who have grown tired of the typical action crime cliches. But the film fails to maintain its originality through to the end - when the hidden twist of the story is unveiled, the rest of the plot feels highly predictable.

However, the actors’ performance makes the movie an enjoyable film for those searching for a light action-packed film.

Known for his gentle image, Han successfully pulls off his heinous role in “The Prison” through his restraint and grave tone in contrast to the “fear” he felt when he was offered to play the vile character. The way he walks and talks in the film adds charisma to make his character seem more intimidating to other inmates.

And Kim pulls off the high-level action scenes that do not simply look cool on the surface but rather look like realistic fights for survival involving gruesome acts like biting off skin (which some may find uncomfortable to watch.)

A number of Korean crime films have been criticized lately for justifying evil characters by making them charismatic and giving them exciting action scenes. However, “The Prison” tries to keep the balance through the depiction of two different characters with contrasting motivations.

The action-packed film will partially fulfill moviegoers’ wish for something new from the crime genre. The film is rated R and is now in theaters.