Chief prosecutor says politics will play no role in decision

Chief prosecutor says politics will play no role in decision 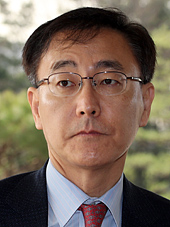 The head prosecutor of the country said Thursday, “law, principles and the progress of the investigation” will be the only factors in deciding whether to attempt to take custody of former President Park Geun-hye.

Prosecutor General Kim Soo-nam made his first public comment on the issue on Thursday on his way to work. Park, the first president of the country to be ousted by impeachment, was questioned for nearly 22 hours earlier this week about her abuse of power and corruption allegations.

The Constitutional Court removed Park from office on March 10, lifting the presidential immunity that has shielded her from criminal prosecution. The special investigation team of the prosecution questioned her on Tuesday and the session ended early Wednesday.

She is currently facing 13 charges, including receiving bribes from conglomerates in collusion with her longtime friend, Choi Soon-sil, and leaking secret information to Choi.

“Whether to seek a detention warrant or not is a matter to be decided based on law, principle and the progress of the investigation,” Kim said as he arrived at the Supreme Public Prosecutors’ Office.

Speculation grew in the legal community that Kim would ultimately decide to seek a warrant to detain Park. According to sources in the prosecution, Kim remained in his office and received briefings about the questioning on Tuesday.

“Kim said he will consider the opinions of the special investigation team the most in deciding,” a prosecution source told the JoongAng Ilbo. “He will also listen to various opinions and then make a final decision.”

Speculations were once made that the prosecution will delay its decision on the fate of Park in order to avoid a controversy that it was influencing the upcoming presidential election on May 9. Kim’s latest comment, however, made it clear that politics will not be a factor.

Park’s lawyers said they are also preparing for the possibility that the prosecution will seek a detention warrant.

According to the sources, Park denied most of the charges during the interrogation. She reportedly denied having colluded with Choi to coerce conglomerates to pay massive donations to two nonprofit foundations that she and Choi allegedly controlled together. She also denied having received bribes from Samsung through Choi.

Park was also accused of having ordered the government to create a blacklist of artists critical of the administration, but she reportedly denied this, as well.