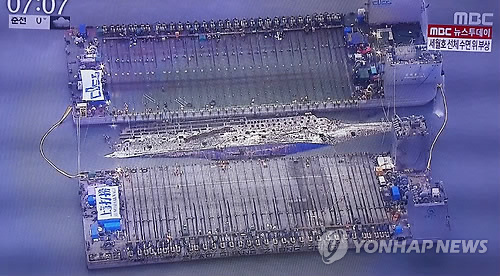 The sunken ferry Sewol began emerging from the water in a massive salvage operation early Thursday, nearly three years after the ship sank and left more than 300 dead or missing in one of the country's worst maritime disasters.

Officials said that part of the ship was seen above the water at 3:45 a.m. as two salvage barges lifted the 145-meter-long, 6,825-ton ship that had been lying at about 40 meters under water off South Korea's southwest coast near the island of Jindo.

"Part of the Sewol's structure, which is believed to be its stabilizer, was seen above the water with naked eyes," an official of the Oceans and Fisheries Ministry said.

If the lift is successful the salvage barges will move the hull onto a semisubmersible ship, which will carry it to the port of Mokpo, he explained.

"It will take about eight days to lift the ship and move it to the port. And it will require four additional days to move it onto a dry dock," the spokesman said.

Before committing to raising the ship, the ferry was carefully test lifted one meter from the sea bottom at 3:30 p.m. so experts could see if the vessel was ready to be raised, the ministry said.

The hull had been left at a depth of some 40 meters for nearly three years since it sank off the country's southwestern coast near Jindo Island in April 2014. The sinking, the country's worst maritime disaster, left more than 300 people dead, mostly high school students on a school excursion. Nine of them still remain missing.

The ministry said salvage workers carried out balancing procedures first before committing themselves to pulling the hull out of the water. It said all technical aspects and local weather conditions were reviewed. Divers also checked the underwater situation to make certain that the operation will go smoothly.

The complete lifting and transportation of the vessel to port is expected to be an arduous process and require good weather conditions, officials said. The hull itself should break the water's surface in the early hours of Thursday if there are no complications.

It took several hours to decide whether to start lifting the ship because the sea must be fairly calm, meaning waves must be under 1 meter and wind speed needs to be below 10 meters per second.

Earlier, the Seoul government decided to pull the ferry out of the water intact in order to protect any remains of the people still missing from the tragic sinking.

The 85.1 billion won (US$72 million) project to recover the ship is being conducted by a Chinese consortium led by China's state-run Shanghai Salvage.

Divers have worked on making the ship buoyant by injecting air into tanks in the vessel and installing large balloons and other flotation devices.

Once the ship reaches Mokpo, authorities will try to find the remains of people still listed as missing and determine why the ship sank.