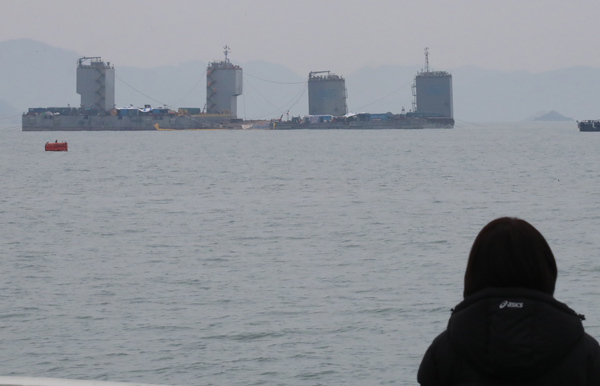 A relative of one of the nine missing victims of the Sewol ferry sinking watches the salvation operation 3 kilometers (1.86 miles) away on a vessel provided by the government on Thursday. [YONHAP]

The salvaging process of the Sewol ferry, which has been ongoing since Wednesday morning, is slowing down as the vessel shifted position while being pulled out of the water and is coming into contact with some wires of the jacking barges.

“The ferry shifted a little as it was being pulled up and is pulling on some wires,” said Lee Cheol-jo, head of the Sewol salvaging committee of the Ministry of Oceans and Fisheries, in a press conference. “We are working on minimizing the contact between the wires and the ferry.”

The ferry has been pulled up by the ministry and Shanghai Salvage, a state-run Chinese company, using a “tandem lifting” method, whereby two large jacking barges are pulling wires connected to 33 beams that were inserted under the Sewol when it was lying on its portside, 44 meters (144 feet) below the surface.

As of Thursday afternoon, the part of the ferry visible above water measured some 2.4 meters high.

Once the ferry is 13 meters out of the water, which the Oceans Ministry expects will be sometime in the late afternoon or evening, it will be placed on a semi-submersible ship to be taken to Mokpo, South Jeolla, about 87 kilometers (54 miles) away from the site to be inspected.
The 6,825-ton ferry capsized off Jin Island in 2014. It was carrying 476 people, 304 of whom, mostly high school students on a field trip, died. Nine bodies are still unaccounted for and are believed to be inside the ship.

Investigations into why the ship sank and searching for the nine missing bodies will commence when the ferry reaches the port. The whole process of salvaging and transporting the ferry to Mokpo may take some two weeks, according to the ministry.

The Sewol ferry broke through the surface of the water for the first time in nearly three years on the early morning hours of Thursday.

“We started seeing part of the Sewol, which looked like its stabilizer, around 3:45 a.m. Thursday,” the ministry said. “Around 4:45 a.m., we could see more of the ferry.”

The starboard side of the ferry that broke the surface showed clear signs that it had been under water for 1,073 days. Severely corroded and damaged, the ferry no longer carried its name “Sewol” on its surface.

Relatives of victims, who watched the salvaging process on television in temporary lodgings at Jin Island and on a vessel provided by the government a few kilometers from the site, broke down at the sight of the ferry.

“We were so happy to see the Sewol finally coming out of the water, but the sight of the ferry broke us,” said Lee Keum-hee, mother of Cho Eun-hwa, a student and passenger of Sewol whose body is still missing. “We have to find the nine missing bodies and determine why the ship sank in order to not repeat a disaster like this ever again.”