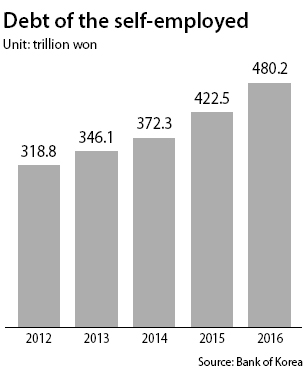 The debt of self-employed workers in Korea rose significantly last year and surpassed debt held by other full-time workers in the country, the Bank of Korea reported Friday, making this group the most vulnerable should the central bank raise interest rates.

At the end of last year, the self-employed owed a total of 480.2 trillion won ($427.7 billion), 13.7 percent higher than the previous year. This means self-employed workers have average debt of 113 million won, about 150 percent more than that owed by other full-time workers.

This report is the first time the central bank has released data on self-employed workers’ debt. The sample size included 10 million people, and the records date back to 2012. The debt includes loans taken out from banks, nonfinancial institutions, personal loans and mortgages.

The figure surpassed the 400 trillion won level in 2015, when it hit 422.5 trillion won. The expansion of self-employed workers’ debt last year outpaced the average growth of debt from mortgages.

The largest portion of the debt belonged to small businesses managing real estate.

They held 39.3 percent of all self-employed debt, followed by wholesale and retail with 15.7 percent and restaurants and lodging with 9.8 percent.

The central bank is less worried about the debt owed by real estate businesses, since their returns are generally high.

What the Bank of Korea is concerned about is debt owed by the self-employed engaged in other sectors. Officials said future interest rate increases will put further strain on this population, especially since many of them have taken out loans to cover basic living expenses.

The central bank estimates about 696,000 households, about 9.9 percent of the self-employed, are most vulnerable to changes in interest rates and slow economic growth.

They are in the bottom 40 percent of income earners.

The Bank of Korea data also showed that more people are borrowing from mutual financial institutions like the National Agricultural Cooperative Federation and National Federation of Fisheries Cooperative.

Debt from these banks is rising faster than that from major financial institutions.

One cause of concern for the Bank of Korea is that loans taken out from these mutual financial institutions have higher interest rates than those offered by major financial institutions. The central bank posited that more people were turning to cooperatives rather than big banks for loans because of tighter government regulations passed last year on mortgages from major banks.

“Mortgages at mutual financial institutions rose significantly due to the strengthened regulations,” said Byun Sung-sik, a director at the Bank of Korea.

The central bank has continued to hold the key interest rate at a record-low 1.25 percent since June.