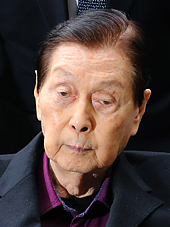 Shin Kyuk-ho, founder and general chairman of the Korean retailer Lotte, has been removed from his company by shareholders, solidifying the succession of his second son, Shin Dong-bin, and coming closer to ending a family feud that started in 2015.

Lotte is the country’s fifth-largest family controlled conglomerate, with 90 affiliates here and abroad.

The shareholders voted in favor of denying the 95 year-old patriarch the position of board director of Lotte Shopping on Friday, which he has held since the affiliate was founded in 1970.

The elder Shin’s term was terminated on March 20.

Kang Hee-tae, CEO of Lotte Department Store, and Yoon Jong-min, Lotte Group’s human resource director, were newly appointed to the directors’ post at Lotte Shopping. Friday’s decision has completed the full control of the younger son, Dong-bin, who took his current role in 2011.

“Lotte Group was able to grow with Shin Kyuk-ho’s leadership until now, but it is time for a new era under the new leadership of Shin Dong-bin,” said Lotte Group spokesman.

Despite taking the role of chairman, Dong-bin was not allowed to make independent business decisions without the final call coming from his father, who held the board director position at most of Lotte’s affiliates.

The father has been losing his board director position starting with Lotte International in 2015, followed by Lotte Confectionery and Hotel Lotte in March 2016.

Lotte Confectionery is the founding company and the foundation of Lotte Group, while Hotel Lotte is the de facto holding company.

Shin Kyuk-ho has been losing his title since he sided with his older son, Shin Dong-joo, who was trying to take full ownership of the group, and fired Dong-bin and six other executives at Lotte’s key operation in Japan.

The founder still has several director positions, but his tenure is coming to an end and is unlikely to be extended. His role at Lotte Engineering & Construction is poised to be terminated on Sunday, followed by Lotte Aluminum and the Lotte Giants in coming month.

Unlike his father, Dong-bin on Friday was appointed as the new director of Lotte Chilsung Beverage during the shareholders’ meeting, which industry insiders say is a necessary step to realigning the organization under his new leadership.

Hwang Kak-gyu, who has worked with Shin Dong-bin for 27 years, was newly appointed as the CEO of Lotte Confectionery, a position that he will share with Dong-bin and Kim Yong-soo. The company said the decision was made to strengthen the company’s overseas business.

Meanwhile, Dong-bin has been increasing his efforts to appease China, which has been bombarding Lotte’s business there as a retaliation against the Korean retail conglomerate’s decision to offer its golf course for the deployment of the U.S. antimissile defense system known as Thaad.

In an interview he had with the Wall Street Journal on Thursday, Dong-bin said, “We definitely want to continue our business in China.”

He added that he “loves” China and believe there has been a “misunderstanding.

“If the government asks a private corporation like ours to give up land, then I don’t think we have the luxury of rejecting the government,” Dong-bin was quoted as saying in the Wall Street Journal.

Lotte Mart, which runs 99 local branches in China, shut down 90 of them in the past couple weeks, partly forced by the Chinese government, which cited safety concerns, and also because of fierce protests in front of its stores.

Lotte Shopping on Friday announced it will issue new shares worth 230 billion won and borrow 130 billion won in order to maintain its Chinese Lotte Mart branches.

“Due to the suspension of Lotte Mart operations in China, there is no revenue generated, which we plan to compensate through capital increase,” Lotte Mart explained. “We need to pay local staff and purchase products.”