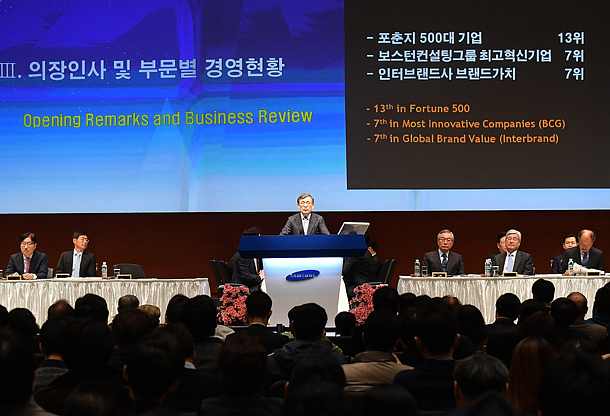 Friday was a big day for shareholders as almost 900 Korean companies, accounting for half of listed firms on Seoul’s main bourse, the Kospi, held annual meetings.

At Samsung, the biggest issue was the tech giant’s timeline for splitting itself into a holding company and operating company. Investors believe this will not only simplify the conglomerate’s complicated ownership structure but also maximize shareholder value at Korea’s most valuable company.

During the shareholders meeting at Samsung’s headquarters in Seocho District, southern Seoul, Kwon Oh-hyun, vice chairman and CEO of Samsung Electronics, suggested the restructuring would take longer than many investors hope.

“We found several negative aftereffects could occur following the transition process, so implementing the plan immediately is not an easy option,” Kwon said. “The company is still examining the matter from many perspectives including legal and fiscal. We promise to notify shareholders as soon as the results are out.”

In a conference call in November, Samsung Electronics said reviewing the structural overhaul alone would take approximately six months, which raised prospects in the market that the company might come up with a concrete plan by May. Kwon’s remarks on Friday suggest that deadline won’t be met.

The decision to postpone restructuring comes at a time when the conglomerate’s de facto leader, Lee Jae-yong, has been arrested on bribery charges. The company is suspected of bribing the government pension fund, a major stakeholder in the conglomerate, in exchange for a merger approval that would secure Lee’s hold on the Samsung empire. Earlier this month, the company dismantled its controversial and secretive central decision-making office.

The company also promised to hand out quarterly dividends and repurchase 9.3 trillion won worth of treasury stock - all plans put forth by Samsung Electronics in November to enhance shareholder value.

At KT, shareholders of the country’s second-largest telecommunications provider approved a second term for its chairman and CEO, Hwang Chang-gyu, despite accusations of his connection to Choi Soon-sil, the shadowy presidential confidante at the heart of the scandal that brought down President Park Geun-hye. The KT chairman will serve for another three years but under the condition of improving transparency and independent management.

“My plan is to find ways to improve corporate governance hand in hand with the board of directors,” Hwang said Friday at the company’s R&D center in Seocho District, southern Seoul.

A host of financial companies also held their shareholders meeting on Friday.