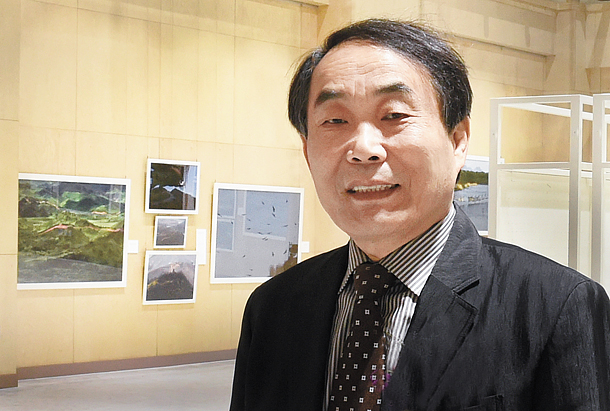 Kim Nyung-nam, a photographer, stands at the DMZ photo exhibition. He says he feels rewarded by the many visitors is has received. [KIM NYUNG-NAM]

The trumpet vines that grow on barbed wire around the Imjin River, redder than the sun, and deep black eyes of Ganghwa Island elk, staring into the camera, are just some of the natural views captured by photographer Kim Nyung-nam in his Korean Demilitarized Zone (DMZ) pictures.

The photo exhibition, titled “DMZ: Land of Life,” opened last September at the DMZ Ecotourism Center in Paju, Gyeonggi, and thousands have already visited. The exhibition includes 52 pictures that depict different moods for every season. For nearly 64 years, the DMZ has remained uninhabited.

“In the early 1980s, when I was working as a DMZ press reporter, I recorded everything about the DMZ,” Kim said. “Initially, I could only see the confrontation between North and South Korea. However, when I overcame my nervousness, nature itself came into my heart.

“After that, I’ve been taking pictures with gratitude to nature for healing the land after the human violence passed,” he added.

According to Kim, the DMZ is now more beautiful than in the past, when he worked as a press reporter. Kim adds that he, too, has changed. Thirty years ago, he worked ceaselessly, taking pictures without breaks. Now, however, he takes his time.

“When I am taking a photo,” he said, “I treat photos as memory not as record. I want my works to have humor and make people happy, like drinking makgeolli.”

“Through Kim’s works, I can see how nature gives us the preciousness of life on earth,” the exhibition organizer, Lee Gi-myeong, explained.

“Nature’s resilience goes beyond the power of man, while the relationship between North and South Korea is getting worse,” Kim said. “Someday, when Korea is unified, people will need a record of the DMZ. When that day comes, I want my work to be useful as a small part of history.”