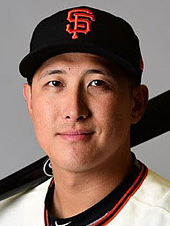 Hwang Jae-gyun of the San Francisco Giants on Sunday was awarded the Barney Nugent Award by his teammates, who voted him as the top rookie in spring training.

Since 1988, the Giants have been giving the Barney Nugent Award to the rookie with the most outstanding performance in spring training exhibition games. Previously called the Harry K. Jordan Award, it was later renamed after former Giants athletic trainer Barney Nugent, who worked for the club from 1993 to 2003.

Of the past 30 rookies that have won the award, 25 have made successful Major League debuts. Tim Lincecum, a pitcher for the Los Angeles Angels, won the award in 2007, and that year, he produced seven wins for the Giants and won the National League Cy Young Award for two straight years in 2008 and 2009. Brandon Belt, recipient of the award in 2011, is now a first baseman for the Giants.

Hwang made his professional debut in 2007 in the Korea Baseball Organization with what was then the Hyundai Unicorns. In his KBO career, 2016 was perhaps his most impressive season as he hit 0.335 with a career-high 27 home runs and career-best 113 runs batted in.

Throughout his KBO career, Hwang recorded a 0.286 batting average with 115 home runs and 594 RBIs. He was also a part of the Korean national team that won a gold medal at the 2014 Incheon Asian Games.

In January, Hwang signed a one-year split contract with the Giants, including an invitation to spring training.

Since the Barney Nugent Award is given based on votes from players on the team, Hwang’s individual skill as well as his effect on the team overall were important determining factors.

During the Giants’ recent game against the San Diego Padres at Scottsdale Stadium in Arizona on Saturday, Hwang helped the team win with a hit in the ninth inning.

Both teams were tied 7-7 when Hwang went up to the plate. The Giants had the bases full and no outs. Hwang’s hit landed in front of the center fielder, and the Giants were able to run home with a score of 8-7.

The rookie had been called into the game to replace Buster Posey at the beginning of the seventh inning.

With that, Hwang’s batting average improved from 0.297 to 0.308 with four home runs, 11 RBIs and five runs. Despite the limited opportunities playing under invitation, the 29-year-old Korean has shown his full potential in spring training and improved his chances of getting on the final 25-man roster for the upcoming season.