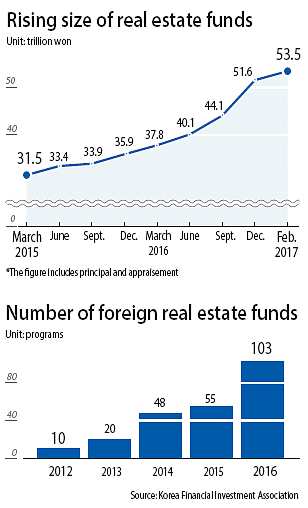 In Korea, public offerings of foreign real estate funds are often sold out as soon as they reach the market. The main buyers? Local investors eager to make a sizeable profit from their high returns.

Mirae Asset Global Investments on March 6 posted an Australian real estate fund called Mirae Asset Maps that was sold out within two days. The fund is connected to the Australian government’s education ministry building in Canberra. The minimum investment requirement per person was 10 million won ($8,912), higher than most public funds, but the financial institution managed to collect its target of 80 billion won very quickly.

Shinhan Bank and other financial institutions also contributed about 50 billion won to Mirae Asset’s Australian fund. Even though repurchase is not allowed until after five years and six months and volatility in Australia’s currency is high, investors were still willing to participate.

The returns on these funds come from rent that financial institutions collect on buildings they own abroad. Some fund managers even might sell the buildings after a certain period of time and give back the profit to investors.

Hana Asset Management began selling a fund tied to NASA’s headquarters in Washington, D.C. The lease on the building runs through 2028, and Hana’s target investment is 156.4 billion won. Hana is applying a 50 percent foreign exchange hedge for investors to reduce risk coming from changes in currency rates.

“It will be an alternative for investors, a stable place to put their money as interest rates continue to remain low,” said Cha Moon-hyun, CEO of Hana Asset Management.

In Paris, NH Investment & Securities is eyeing a building that will likely be used as the headquarters of French cosmetics company L’Oreal Group.

Mahdi Mokrane, head of Europe strategy at LaSalle Investment Management, suggests the rate of returns for investments in commercial areas in Frankfurt, Amsterdam and Paris will be higher than the average figure for the European Union. Mokrane also recommended Japan and Australia as stable real estate investments.

Of course, there is inherent risk with putting too much money into one investment and expecting high returns, especially in real estate. Real estate funds are categorized as dangerous sectors for investors because not many can be sure how housing prices might change. Investors are also limited in when they can repurchase or sell their funds. It is possible for investors to lose their principal as well.

Currency volatility, too, is a big risk factor when investing abroad. The fund products without a foreign exchange hedge requirement might offer higher rates of return, but investors might end up facing huge charges when they exchange their profit into their home currency.

A foreign exchange hedge, on the other hand, lowers the rate of return since investors might have to pay a certain amount of money in advance as a form of insurance.

“In the past, investors who invested in major developed countries like the United States and the European Union member states were able to receive at least their first principal even though they technically lost money after the currency exchange,” an industry analyst said. “But it doesn’t work that way anymore.”