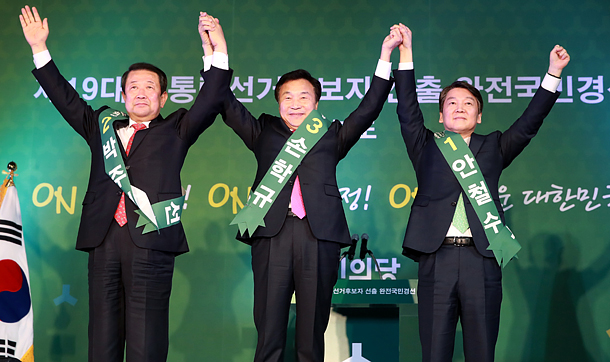 Presidential contenders in the minor opposition People’s Party, from left, Park Joo-min, Sohn Hak-kyu and Ahn Cheol-soo join hands on Sunday at a gymnasium in Jeonju, North Jeolla, during their second primary election. Ahn won the first primary with 60.69 percent of the vote. [YONHAP]

Rep. Ahn Cheol-soo won the first primary of the minor opposition People’s Party in Gwangju, South Jeolla and Jeju by a landslide of 60.69 percent to 22.91 percent over Sohn Hak-kyu and Rep. Park Joo-min’s 16.4 percent on Saturday, a major victory that likely positions him to become the liberal party’s presidential nominee.

The first primary, one out of seven scheduled, was considered the most crucial round leading up to the party convention because out of roughly 190,000 party members, 70,000 are from Gwangju and South Jeolla.

The turnout for the primary, which was held Saturday, was 26,981 in Gwangju, 33,056 in South Jeolla and 2,352 on Jeju Island, which the party said had a much larger turnout than expected.

An official from the People’s Party said Ahn’s victory was probably the result of “Honam’s strategic choice” to support the party’s former co-chair because they didn’t want to see Democratic Party presidential contender Moon Jae-in as president.

Honam refers to North and South Jeolla, both Korea’s liberal stronghold. A second primary was held Sunday in North Jeolla but the results weren’t available as of press time. A third vote is scheduled for Busan, Ulsan and South Gyeongsang on Tuesday; a fourth in Daegu, North Gyeongsang and Gangwon on Thursday; the fifth in Gyeonggi on Saturday. Elections in Seoul and Incheon will be held Sunday; while voters will go to the polls in Daejeon, South Chungcheong, North Chungcheong and Sejong City on March 4.

The primary votes account for 80 percent of the party’s final pick on its presidential candidate, while the remainder will be based on a national survey, set for April 3 and 4. The results will be announced April 4.

At the minor conservative Bareun Party, a breakaway from former President Park Geun-hye’s Saenuri Party, predecessor of Liberty Korea Party, Rep. Yoo Seong-min was declared Saturday to have swept all four polls by non-party members, bringing him one step closer to becoming the conservative party’s presidential nominee. The results were based on a telephone survey on 2,689 non-party members last week after four sets of policy debates between Rep. Yoo and Gyeonggi Governor Nam Kyung-pil. Yoo garnered 1,607 votes (59.8 percent) and Nam 1,082 votes (40.2 percent).

The polls account for 40 percent of the total primary vote; the remainder is split in half by a public survey, which was held over the weekend, and a party members’ vote that began Sunday and will end today. The party’s presidential nominee will be announced Tuesday.

The Democratic Party will hold a primary election in Gwangju today and also announce the results of an earlier poll of party and non-party electorates and telephone surveys in Gwangju, South Jeolla an North Jeolla.