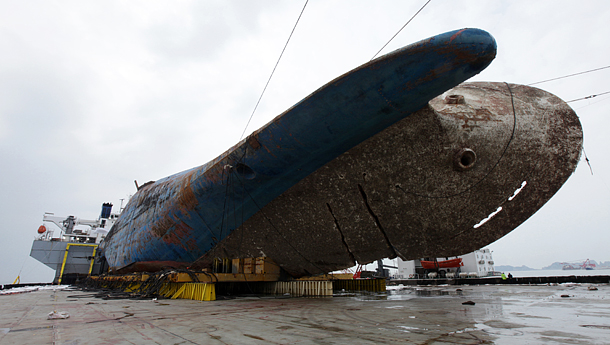 The Sewol ferry is lying on its port side on a semi-submersible ship on Sunday southwest of Jindo, an island in South Jeolla. The ferry was raised completely out of the water a day earlier, nearly three years since it sank and took 304 lives, most of them high school students on a field trip. [YONHAP]

The Sewol ferry rose from the water in one piece on Saturday evening, showing itself in full view to the families of the 304 victims, nine of whom are still missing, for the first time in nearly three years.

Lying on its port side on a semi-submersible ship, as it did for 1,072 days on the seabed 44 meters (144 feet) below the water’s surface, the ferry was scratched and corroded but showed no signs of a collision on its exterior, though much of its structures on the prow and deck appeared destroyed or missing.

One of the alleged causes of the ferry’s capsizing was that it collided with a submarine or a heavy object underwater.

The ferry also showed more than 100 holes in its exterior punctured during the salvaging process. It had two long vertical gashes on its port side, descending from the prow.

The Ministry of Oceans and Fisheries said nothing can be confirmed until investigations commence when the ferry reaches land.

The 6,825-ton ferry capsized off Jindo, an island in South Jeolla, on April 16, 2014. It was carrying 476 people, 304 of whom, mostly high school students on a field trip, died. Nine bodies are still unaccounted for and are believed to be inside the ship.

On Thursday, the ferry broke the surface of the water after being pulled up by two jacking barges for a day and by Friday was hoisted 13 meters out of the water and towed toward a semi-submersible ship waiting nearby.

It was placed on the semi-submersible ship around midnight, disconnected from the jacking barges, and was completely out of the water at 9:15 p.m. Saturday.

Workers continued to try to deplete the ferry of leftover seawater and oil on Sunday. After this work is complete and the ferry is further fastened to the ship, it is expected to leave for Mokpo, South Jeolla, on Tuesday at the earliest.

“It may take some three to five days of taking out the seawater and oil left inside the ship and getting it ready to depart for Mokpo New Port,” said Lee Cheol-jo, head of the Sewol salvaging committee of the Ministry of Oceans and Fisheries, in a press conference on Saturday.

“The process of depleting the water and oil will be conducted as slowly as possible, because doing it quickly could lead to losses in the articles and properties of the victims,” said Hwang Dae-sik, secretary general of the Maritime Rescue and Salvage Association. “Once the ferry reaches land, it will be investigated to determine the cause of its capsizing, so there is a need to minimize any human intervention to the state of the ship.”

The semi-submersible ship carrying the ferry is expected to travel at some 4 to 5 knots or some 10 kilometers (6.2 miles) per hour, which means it will take about 10 hours to reach the Mokpo New Port once it departs.

The ferry, weighing some 10,000 tons altogether with cargoes and sediments will then be hauled onto a dry dock using a type of modular transporter.

The ferry lying on its port side on the semi-submersible ship showed 126 holes, punctured by Shanghai Salvage, a state-run Chinese company working with the Oceans Ministry in hoisting the ferry out of the water using the “tandem lifting” method.

The ministry had explained that the holes were necessary as part of the salvaging process, and that workers had installed nets on or around the ferry to prevent articles or bodies from getting lost in the sea.

The ministry said it may puncture some more on the bottom of the ferry to draw out remaining water, adding that these areas are not connected to the cabins where the bodies or articles of the dead are expected to be.

A 160-meter by 200-meter mesh-fence that is 3 meters high was also installed on the seabed around the ferry in April.

Once the ferry reaches port and is safely fastened, the Oceans Ministry with Shanghai Salvage will begin underwater investigations at the seabed where the ferry used to lie. Divers will be dispatched to search within the fence, and the area will be divided into 40 sections and searched thoroughly one by one. Each will be searched four times, according to the ministry.

But some raised questions that an opening on the ferry’s port side remained immersed in water as it was towed for a few kilometers to the semi-submersible ship.

“The opening was at the cargo section of the ferry, and it’s unlikely that a victim’s body could have been there,” Lee said. “We didn’t know when we were lifting the ferry from the seabed that the ramp was open because the ferry was lying on its port side.”

This opening was partly visible as the ferry lay on the semi-submersible ship on Sunday, and a car and an excavator could be seen stuck at the opening.

Once the ferry is successfully fastened at the port in Mokpo, investigations into the cabins will commence.

“We may cut into the cabins from the outside in searching for the missing bodies,” said Yoon Hag-bae, vice minister of the Oceans Ministry.

Some relatives of victims were opposed to this idea.

“I do not think cutting into the cabin section may be the fastest way to get to the area,” said Kwon Oh-bok, 61, brother to Kwon Jae-geun, 53, and uncle to his 7-year-old son, Hyuk-kyoo — passengers of the Sewol still missing. “I think it may be faster to find a route into the cabin section without trying to cut anything from the outside.”