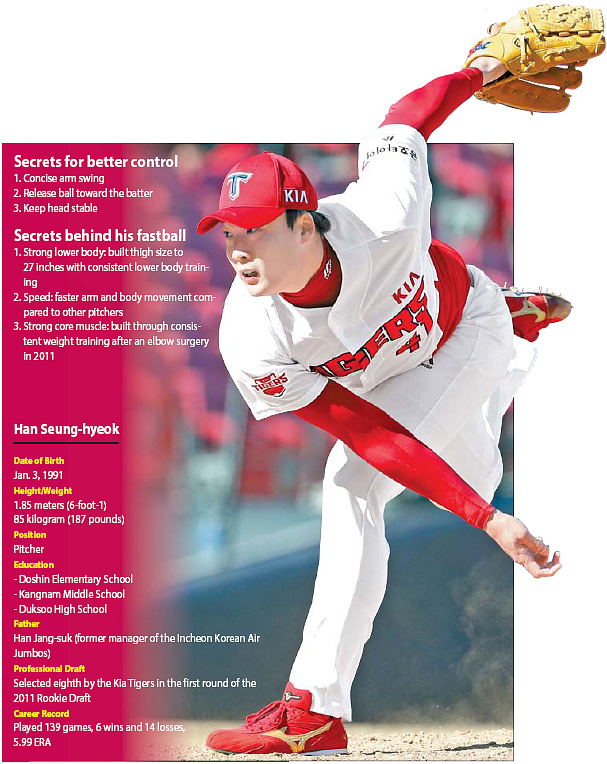 Pitcher Han Seung-hyeok of the Kia Tigers was the one to watch at this season’s Korea Baseball Organization spring training. During five exhibition games, he gave up just one hit and no runs with his mean 157-kilometer-per-hour (98-mile-per-hour) fastball.

It used to be even higher.

While attending Duksoo High School, Han was able to throw 150 kilometers an hour. He wore a hat that proudly boasted, “No one can hit my fastball.”

But as soon as he was drafted to the KBO’s Kia Tigers in 2011, Han suffered an injury on his right elbow and had to undergo surgery to reconnect his tendon. After a year of rehab, he was back on the mound, but his pitching had noticeably deteriorated.

In a sense, he was back to square one.

Over the years, Han has gradually improved again, and this season, he appears to have added more accuracy to his fastball. It was a process that began at the end of last season, when Lee Dae-jin, the Kia Tigers’ pitching coach, offered to help Han change his form.

“Every year, people noted that my control needed work, so I was aware of what I was lacking,” Han said. “But I was scared of the change.”

Han made the decision to trust Lee and worked so hard that he even injured his rib at the beginning of last season, which prevented him from playing.

When he returned in June, he recorded three wins, two losses and nine holds with a 4.86 ERA. It was the best record since his debut.

“I started to have stability in my pitching toward the end of last season,” Han said, “and I produced good results in exhibition games as it continued.”

A pitcher’s control normally deteriorates if he just focuses on pitching fastballs. It’s a big reason why many rookies fail to perform in the KBO. What they gain in control, they lose in speed, trading one strength to improve a weakness.

Han tried to be good at both. In his old form, he had a big swing, but ever since he tightened it, his control got better. He also got better at releasing the ball more toward the batter, which helped his control as well.

Confidence was another driving force for Han. In previous seasons, he would get discouraged when he gave up a home run or walked a batter. But now, he’s gotten better at letting things go.

“Regardless of the result of the game, I try to have the same expression and mind-set,” Han said. “I felt timid when I had to pitch against good batters, but now, I try to think that I’m bigger than the batters.”

Han comes from an athletic family as his father, Han Jang-suk, was a hitter for the Korean national volleyball team and former manager of the Incheon Korean Air Jumbos, a women’s volleyball team. “I’ve worked hard on lower body training since I was little,” Han said, which has helped with driving his fastballs.

This season, Kim Ki-tae, manager of the Kia Tigers, selected Han as the MVP in spring training. Kim complimented Han for his work ethic and passion for baseball as he was always willing to learn more, and Han himself believes he has a long ways to go.

“I think I’m still incomplete as a pitcher,” he said.

With his outstanding spring training performance, fans expect Han’s fastball to reach 160 kilometers per hour this season, but Han says he doesn’t want his ball speed to get any higher. “Control is my priority.”