Looking to the stars for inspiration

Looking to the stars for inspiration 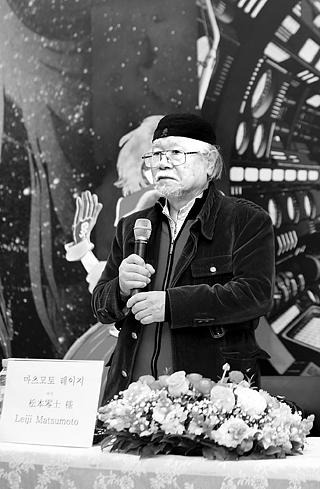 “Don’t you want an eternal life?”

This deep philosophical question was asked by the cartoonist of the popular animated TV series “Galaxy Express 999,” Leiji Matsumoto at the Hangaram Art Museum at the Seoul Arts Center in southern Seoul. His first visit to Korea was for an exhibition to celebrate the animation’s 40th anniversary.

The series is set in the high-tech future, in the year 2221, where humans can transfer their minds to mechanical bodies. In order to obtain a metal body to live an eternal life, a boy named Tetsuro Hoshino embarks on a journey with Maetel, a mysterious blonde woman who looks just like his mother, on the “Galaxy Express 999” to Andromeda. Tetsuro’s adventure to the exotic planets raise questions about eternal life and humanity, and has earned reviews that this is not merely a cartoon, but a piece of philosophy.

Matsumoto, who was born on 1938, said, “In my childhood, I played with bullets and even got shot in battlefields. I realized that people live their best because life is limited. I decided to reflect this into my works.” 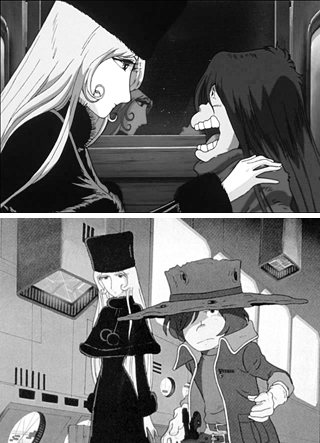 Maetel, left, is the mysterious woman who accompanies Tetsuro on a journey to Andromeda. [TOEI ANIMATION]

First serialized in the Japanese magazine Shonen King in 1977, the story earned popularity the following year when it aired on Fuji TV. The cartoon was popular in Korea as well, as it aired four times from 1982 to 2008.

Matsumoto began drawing cartoons when he was just 9, and made his debut in 1954 when he was 16. “I wanted to become a mechanical engineer, but I drew cartoons to make a living. When I was struggling in poverty in Fukuoka, I got on a train to Tokyo. To me, that train to Tokyo was ‘Galaxy Express 999’,” he said.

With an interest in space, most of his works are set out in the universe. “The light you see when the train was passing through tunnels reminded me of space,” he explained.

His science fiction animation “Space Battleship Yamato” (1974), which is also set in space, was criticized that it beautifies Japanese imperialism, as it is about a revival of a Japanese battleship which sunk in the Pacific to fight with aliens. About this controversy, he said as the Yamato was the biggest battleship he saw in his childhood, he just imagined what a big ship would look like in space.

In the end, Tetsuro refuses to turn into a machine body. When asked about if Matsumoto himself would want to turn into a metal body, he emphasized that he would never want to. “We make most of our lives because life is limited. Time never betrays dreams. Also, we should never betray dream and time for a valuable life.”

“Galaxy Express 999” is still being published in Japan, and is unfinished. ”It is a promise that even when I die, I want to continue traveling,” answered Matsumoto when asked about the black beanie with a red skull that he always wears. He added that the number 999 represents incompletion. “The character of Tetsuro is me, as we both are chasing after our dreams. I want to keep working on the journey of Maetel and Tetsuro. ‘Galaxy Express 999’ and me are both in an endless voyage.”

200 pieces including the story boards of the origins of the cartoons, as well as original pictures and manuscripts are exhibited at the Hangaram Art Museum in the Seoul Arts Center, located in southern Seoul. The exhibition goes until May 1. Call (02) 338-3513 for more information.