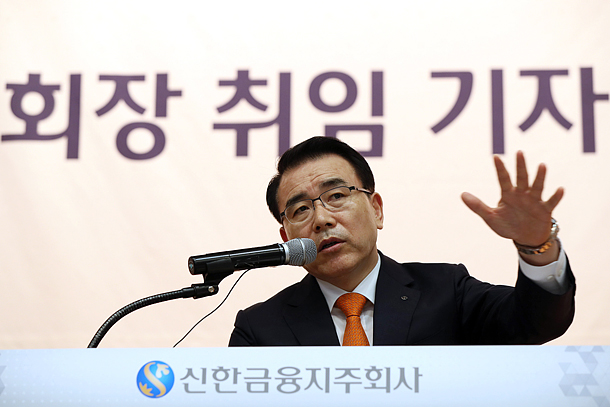 Under the leadership of Cho Yong-byoung, the new chairman of Shinhan Financial Group, Korea’s largest financial holding company hopes to look beyond its borders and become Asia’s leading financial group by 2020, in a vision laid out by the new chief executive on Monday.

Cho’s appointment was approved during a shareholders meeting on March 23. During his first press conference at Shinhan Bank’s headquarters in Jung District, central Seoul, on Monday, he mapped out his management plan for the next three years of his term, with a particular focus on completing digitalization of the group, improving user experience and diversifying products and services.

“The path which Shinhan has taken so far is a history of accumulation and growth,” Cho said. “Now, Shinhan is at a juncture in which it must take on new challenges.”

Cho is replacing Han Dong-woo and brings with him experience as chief executive of Shinhan’s banking subsidiary, Shinhan Bank, the largest in Korea by profit. With Cho at the helm, the bank enjoyed tremendous growth, including a 30 percent increase in net profit from 2015 to 2016 that totaled 1.94 trillion won ($1.75 billion).

“Three of our subsidiaries are leading their respective industries, while others are either in the middle or falling much behind,” Cho said. “Those at the top of their industries must continue to do so and even widen the gap, while other subsidiaries must find new strategies including new target clients or markets.”

One of the key strategies for Cho is diversifying the group’s portfolio and generating profit beyond loan interest. Cho said the key is improving the group’s capabilities in asset management and cutting operational costs.

Although Cho emphasized the necessity of digitalization, the chairman also acknowledged the inherent uncertainty that new technology poses. “The barrier between financial and nonfinancial sectors is collapsing, but it is a path no one has yet to take,” Cho said. “We must ultimately secure a competitive edge and think about how we can benefit our customers while utilizing newly available technology to streamline our work.”

Cho touched on efforts to expand overseas through digital banking. Sunny Bank, Shinhan’s mobile banking service, has about 40,000 users in Vietnam, which Cho said was a good sign, “because unlike before, when opening up new branches in different countries was difficult due to all the regulations, there are fewer regulations involving digital banking.”

Shinhan’s strategy is to create platforms in other markets through partnerships with local tech and telecommunications companies.