At LG, batteries are smashed in name of safety

At LG, batteries are smashed in name of safety 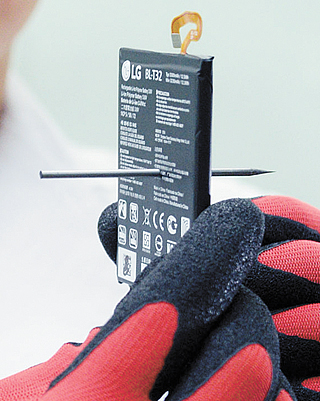 A battery for LG Electronics’ G6 smartphone is pierced by a nail during a test to see whether it will explode upon impact at the company’s lab in Pyeongtaek, Gyeonggi, on Friday. The result: it did not. [LG ELECTRONICS]

PYEONGTAEK, Gyeonggi - At LG Electronics’ test lab here on Friday, a 20-pound metal weight was dropped from a height of 2 feet and landed on a smartphone battery with a loud thud.

The battery cracked in two, but there was no explosion - a successful test by LG’s measures.

The heart of the company’s mobile business is located in the LG Digital Park, a sprawling campus in this fast-growing city about 40 miles south of Seoul. Here, phones are dropped, batteries smashed and electronics submerged in water all for the sake of ensuring the safety of devices that LG sells.

Inside a penetration test machine, a battery for the company’s latest high-end smartphone, the G6, was hanging in midair, waiting to be skewered by a 3-inch nail. “The experiment is set up to test the safety of the battery even in extreme situations like a pet dog biting it,” said Kim Sung-woo, a chief engineer at LG Electronics’ battery lab.

As battery safety has become a major concern among consumers following the battery-induced fires of Samsung’s Galaxy Note7 last year, LG has ramped up battery tests for its G6 smartphone, which the company released on March 10.

“Smartphone batteries without proper design are like bombs,” Kim said. “After the recent incidents, we have increased the number of test samples to strengthen our battery quality check-ups.”

In a fire simulation room, batteries are deliberately burned inside a 2-foot-wide space enclosed by a protective fence to ensure no debris from the batteries causes harm in the worst-case scenario of an explosion. Other experiments test the batteries’ ability to withstand continuous charging and discharging, flammability and pressure.

In another building, completed smartphones are tested in even harsher and more various conditions, more than 1,000, according to the company. Each new model goes through about 5,000 hours of inspection before entering the market. In one test, a phone is dropped from about 3 feet onto an iron surface. “It’s the conventional height that adult users might drop their phones onto various surfaces while walking,” said Kim Kyun-heung, an LG senior manager.

The company markets the G6 as a waterproof phone, and to prove it, researchers submerge the phone nearly 5 feet in the water for 30 minutes to see if it can still function. In another test, called the tumble test, the device is placed inside a transparent box which a machine continuously turns to see if the phone can hold up as it rolls on the ground.

LG Electronics boasts that the G6 has passed military-standard durability tests by the U.S. Department of Defense, meaning it could be used in combat situations like its predecessor V20 smartphone. While the V20 only passed the transit drop test, where devices are dropped several times, LG’s G6 has passed tests in 14 categories including the transit drop test, rain test, humidity test and temperature tests in both high and low conditions.

“G6 boasts military spec in the most number of categories among phones in the market,” LG said in a statement.

Smartphone tests begin roughly six months prior to a model’s launch. Kim said other phones that have not been released in the market yet are currently being tested in the facility’s third floor and preparing for an upcoming launch.

On the building’s fourth floor, final assembly of the G6 smartphone is done on 14 production lines each nearly 120 feet long. About 20 staff members on each line busy themselves putting together the phones as machines take care of more subtle processes like tightening tiny screws on the phones. The final 80 feet of the production line is devoted to testing the quality of phones’ basic functions like voice recognition, speakers, cameras and waterproof function.

“Consumers these days put a focus on basic functions like the safety and durability of a phone,” said Lee Suk-jong, senior vice president of LG’s mobile communications business. “The interest has pushed us to also strengthen inspection of batteries.”

Sales of the G6 began earlier this month in Korea, and the phone is scheduled for release in the United States, Europe and Latin America early next month. Gearing up for the global supply, the Pyeongtaek factory is manufacturing 50,000 G6 phones a day, according to Lee.

“In April, we are expecting to deliver better news regarding G6 sales,” Lee said.

The 5.7-inch Android phone with an unprecedented 18:9 screen captured the top market share in Korea during the second week of March after its launch. More than 30,000 G6 phones were sold two days after release, according to the company.