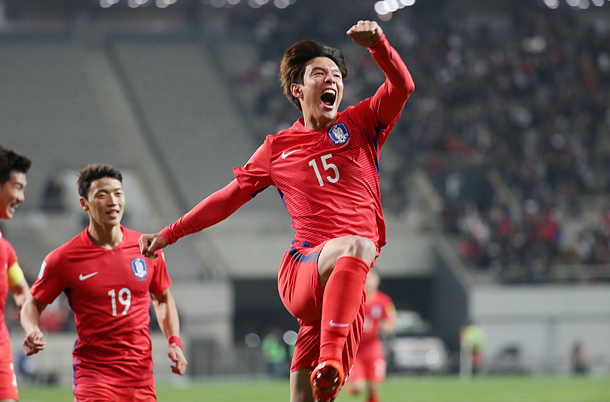 Hong Jeong-ho celebrates after scoring a goal against Syria in the final World Cup qualification match at Seoul World Cup Stadium in Seoul on Tuesday. [YONHAP]

Hong Jeong-ho scored the only goal of the match to help Korea collect their fourth victory at home in the final Asian qualifying round for the 2018 FIFA World Cup. Both Korea and Syria are in Group A, where they are also paired with Iran, Uzbekistan, Syria and Qatar. Korea and Syria played to a scoreless draw in their previous meeting in September.

The latest victory assured Korea will retain the No. 2 spot behind Iran for the time being. The Taeguk Warriors now have four wins, one draw and two losses for 13 points. Only the top two teams in the group directly advance to the World Cup in Russia, while the third-place team must go through playoff rounds to enter the world football's showpiece event.

Korea, looking for their ninth straight World Cup appearance, will next face Qatar in Doha on June 13. They will later host Iran in August and face Uzbekistan on the road in September to conclude the World Cup qualification.

After suffering a stunning 1-0 defeat to China last Thursday, Koreans were in desperate need of rebounding. Korea head coach Uli Stielike made three changes from the starting lineup against China, and one of the new players was forward Hwang Hee-chan, who had his first start in this qualifying stage. The 20-year-old was supported by Son Heung-min and Nam Tae-hee.

In the midfield, Stielike deployed Koo Ja-cheol and Koh Myong-jin, while captain Ki Sung-yueng was the lone anchorman in front of the back four comprised of Kim Jin-su, Jang Hyun-soo, Hong Jeong-ho and Choi Chul-soon. Kwoun Sun-tae, who was the starting goalkeeper against China, again wore the gloves for Korea.

The hosts took the lead just four minutes after the kick off. Hong fired a left footed shot in the box uncontested after Syrian defenders fail to clear Son's corner kick. It was only Hong's second international goal in his 40th appearance for Korea.

In the 14th, left back Kim curled a shot with his right foot, but was saved by Syrian goalkeeper Ibrahim Alma.

Syria, sticking to a counter attack strategy and trying to capitalize on set pieces, posted their first shot in the 17th when Omar Kharbin took a right footed effort in the box after receiving a Mouaiad Al Ajjan free kick. The visitors almost pulled off an equalizer in the 31st when Alaa Al Shbli struck a right-footed shot following Mahmoud Alkawas' free kick, but his attempt was too high.

In the 41st, Son, who missed the action against China due to yellow card accumulation, blasted a shot from a distance, only to see his effort go over the net.'

Looking for an equalizer, Syria went aggressive from the start of the second half as they tested the Korean defense that previously had no clean sheet record at home in the final round.

Korea shifted their gears later with Nam, who fired a header in the 56th and a left footed effort five minutes later. The 25-year-old winger in the 66th stung the palms of Alma with his right foot.

Syria almost got their equalizer after Al Khatib had a one-on-one opportunity in the box in the 71st. His left-footed strike from close up, however, was denied by Kwoun.

Korea made their second substitution in the 73rd, taking out Hwang for another striker, Lee Jeong-hyeop.

In the 81st, Son almost doubled the lead for the hosts as he met Ki's cross uncontested in the box, but the Tottenham Hotspur attacker was caught offside. Three minutes later, Ki's strike from a tough angle on the right side of the box was saved by Alma.

Both sides were given four minutes of added time, and Al Khatib nearly shocked some 30,0000 fans at the stadium in the 91st as his left footed attempt hit the crossbar.

Kwoun picked up a yellow card in the 93rd for delaying the play, but his team still went on to pick up three points.

This was Korea fourth one-goal victory at home. They previously beat China and Qatar with a score of 3-2, and edged out Uzbekistan 2-1.