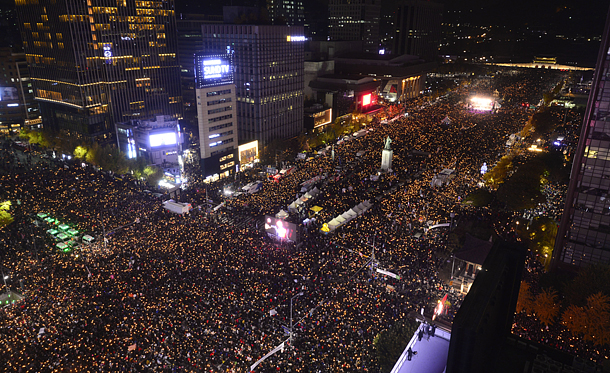 Nowadays, ideology is as transient as spring haze. Exactly 100 years ago in 1917, two significant events on par with the Renaissance and the discovery of the New World occurred in Russia. The first was the February Revolution that resulted in the end of the Russian Empire and abdication of Tsar Nicholas II. The other was the Bolshevik Revolution eight months later that led to a socialist state.

Once there were young Korean revolutionaries studying 20th century Russia. It was in the 1970s and 80s, when activist-turned-politicians Moon Jae-in, An Hee-jung and Shim Sang-jeong, who are running for president, were young. They had read forbidden yet essential books like “Understanding Contemporary Korean History After Liberation,” “Logic in the Age of Transition” and “History of Russian Revolution” and dreamt of social change.

Some old revolutionaries have become political bigwigs with big ambitions. But no one remembers the Russian Revolution. Even Russia itself does not commemorate the February Revolution because President Vladimir Putin doesn’t like it. It is only natural that it is forgotten in Korea.

But it is worth remembering Russian history as the February Revolution resembles the candlelight vigils sparked by the Choi Soon-sil scandal. Coincidentally, Nicholas II and former President Park Geun-hye have a lot in common. Nicholas II kept his distance from the Russian people and officials, as Park did. He ignored advice and went on to participate in World War I, resulting in great suffering for the people. He was also influenced by an unfit person who helped ruin the state administration. Just as Park was controlled by Choi Soon-sil, Nicholas II was a puppet of Rasputin. When Nicholas II was heir apparent, he travelled through Japan in 1891 and was attacked by a Japanese samurai who hated Russia. He had contempt towards Japan all his life. In 2006, Park was attacked by an opponent, who slashed her face. Just as Park was impeached after nationwide opposition symbolized by the candlelight vigils, Nicholas II was ousted by the February Revolution led by angry Russian mobs.

What we need to note is the developments after the revolution. As in the French Revolution, Russian revolutionaries advocated justice and democracy. But the revolutionaries who successfully toppled absolute evil were complacent with their accomplishment and fell into self-righteousness. The Russian Revolution led to the Bolshevik dictatorship led by Lenin.

Those who come into power after an upheaval are likely to deny the legacy of their predecessors. It often happens in the United States, the cradle of democracy. U.S. President Donald Trump wants to change every policy his predecessor Barack Obama promoted. The media say that Trump wants “anything but Obama.”

The rejection of the past is bound to be more serious in Korea. A new administration would want to differentiate itself from its predecessor to make an impressive mark in its five-year single-term. Policies of the predecessor will be discredited or undone. Especially since Park has been impeached, the new administration is likely to reject any policies associated with her.

There is no such thing as absolute good in the world, and there is no policy that must not be changed. But it is worrying that sensitive issues like the Thaad deployment and comfort women agreement with Japan could be thrown away just because they were done by Park. Unless there is a special reason, a new administration needs to keep promises made with other nations. Only then will foreign governments trust Korea without worrying that agreements could be scrapped when power changes hands.