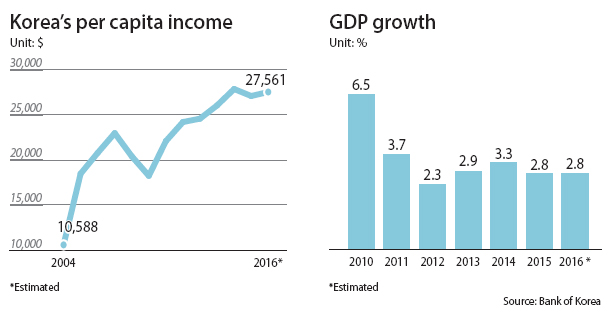 The Korean government has long considered per capita income of $30,000 as the final step to becoming a fully developed country.

Once again, the country failed to reach the target this year, affected by slow economic growth.

Gross national income per capita stood at $27,561 last year, up 1.4 percent from the previous year, according to data released by the central bank on Tuesday. The country’s per capita income has not broken $30,000 since surpassing the last marker of $20,000 in 2006.

In local currency terms, the figure comes to about 31.2 million won ($28,730), up 4 percent over a year ago, according to the preliminary report. This conversion indicates depreciation of the won against the dollar.

Of the total 1,632.6 trillion won in gross national disposable income last year, the share taken up by the government sharply increased by 9.5 percentage points year on year to 23.1 percent as it acquired more revenue from corporate and income taxes.

The growth of household contribution, on the other hand, was relatively low at 4 percentage points as Koreans have been beset by stagnant salary increases and higher consumer prices.

Kim said general economic expansion, boosted by solid investment and domestic consumption, is a prerequisite for breaking past $30,000.

The Bank of Korea said it raised its reading for 2016 economic growth by 0.1 percentage point from a previous prediction in January because of better-than-expected results in manufacturing and construction investment.

“Last year saw rising spending in private and public sectors and higher construction investment,” said Jeong Gyu-il, head of the economic statistics department at the Bank of Korea. “But with the reduced investment in factories and equipment, the economy grew 2.8 percent.”

Private and government consumption increased 2.5 percent and 4.3 percent, respectively, from 2015 to 2016. Construction investment showed the steepest increase, 10.7 percent, boosted by a boom in residential development. Investment on factories and equipment, however, dropped 2.3 percent.

Meanwhile, the country registered a higher level of saving. The gross saving ratio came to 35.8 percent in 2016, the highest since 1999, when it stood at 35.9 percent.

As for next year’s prospects, Kim said Korea will likely face headwinds to robust growth.